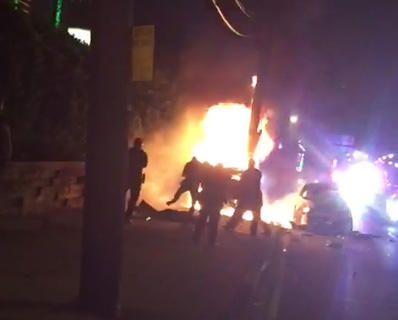 JERSEY CITY, N.J. -- A wild police chase through the streets of Jersey City late Sunday ended in a fiery crash, a driver's clothes on fire, police caught on video kicking that man, prosecutors investigating the incident, city officials raising the possibility of firing officers involved, and the police union defending officers who were there, reports CBS New York.

The sequence of events was still murky early Thursday, but it all apparently began with police getting a call about shots being fired and trying to pull over a car that then sped from the scene, authorities say.

During the pursuit, police fired several shots at the car as it caused accidents, then crashed into a utility pole, taking another vehicle with it, says CBS New York.

Flames burst from the two cars wrapped around the telephone pole, with downed electric wires fueling the fires. The scene was captured on video by onlookers.

Witnesses told CBS New York that, moments earlier, they saw squad cars getting into formation. "They came out into the middle of the road and created a barricade," witness Tom Evans told CBS New York. "As that barricade was being created, there was a loud boom. Two cars smashed into one another and into a telephone pole."

As officers worked to rescue a trapped driver inside one vehicle, another man took off running from the scene, according to Evans. "There was another guy that flew out of one of the cars," Evans said. "They were aggressive after him, handcuffed him and threw him in the back of a cop car."

But video also captures a man rolling out of one of the cars, flames surrounding his upper torso. He sits up and pulls off and throws away a jacket or shirt, which was apparently what was burning. He then collapses flat on the ground.

Officers are seen on the video surrounding the man with guns drawn, kicking him, and finally dragging him away.

A 28-year-old authorities say was an innocent victim in the second car was badly burned, and the driver police were pursuing was also recovering in a hospital late Monday.

That driver – identified as Leo Pinkston, 48, of Jersey City – was facing eluding and assault charges.

Several police officers suffered minor injuries but had been released from the hospital by Monday evening.

There was no word late Monday on whether Pinkston was linked to the shots fired call. There was also no word on whether he is the man seen being kicked by the officers.

Jersey City spokesperson Jennifer Morrill issued a statement saying in part, "We are working with the Hudson County Prosecutor's Officer and are in the process of identifying the officers on this video. Once we clearly identify all the officers involved, we will be seeking termination in addition to any possible criminal penalties in appropriate cases."

The president of the Jersey City Police union, Carmine Disbrow, said in a statement that, "As it should be, this entire incident is being fully investigated. Taking swift action isn't always elegant, but this video clearly shows that the officers acted quickly to extinguish the flames, and pull this man out of harm's way."