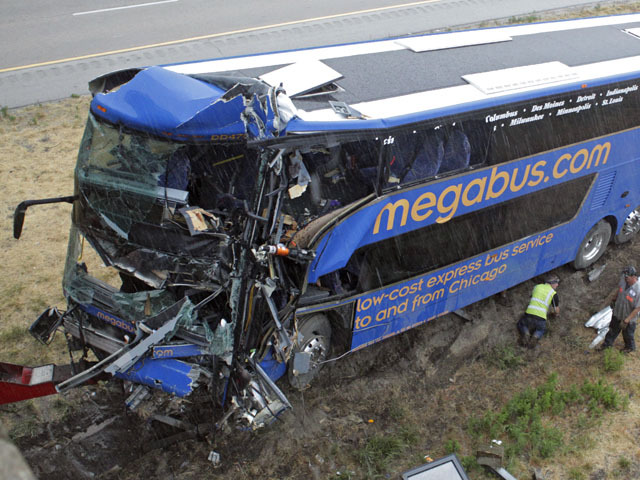 (AP) LITCHFIELD, Ill. - A blown tire likely caused a double-decker bus to lurch out of control and strike a bridge pillar in the grassy median of an interstate highway, killing one passenger and injuring nearly four dozen others, an Illinois State Police investigator said Friday.

A fully packed Megabus crashed head-on into the concrete pillar Thursday afternoon on Interstate 55 near Litchfield, Ill., about 55 miles northeast of St. Louis. The front of the bus was so mangled rescuers had to use ladders to pull people out windows of the upper level.

Passengers gave harrowing accounts of the wreck: People screaming, blood in the aisles, injured passengers tossed about. Several reported hearing a tire blow out just before the crash, and Illinois State Police Lt. Louis Kink said that likely was the cause.

"You figure at 65 mph, it would be hard to control a vehicle that big with a blown tire," Kink said.

There was no evidence of driver error and no other known contributing factors, Kink said, though a final investigation report could take two weeks. The weather was dry at the time and there was no road construction along that section of the interstate, Kink said.

ISP investigators have determined the bus was carrying 78 passengers, plus the driver and a second driver who was riding along. University of Missouri graduate student Aditi Avhad was pronounced dead at the scene.

Forty-seven people were taken to hospitals, including at least five who were flown to Springfield, Ill., and St. Louis, with more significant injuries. They included the driver, who underwent surgery for undisclosed injuries. His name has not been released.

Kink said all the injured are expected to survive.

Megabus is a low-fare bus service. The company said it has transported more than 19 million passengers since its founding in 2006.

The bus that crashed Thursday was manufactured just last year by Belgium-based Van Hool. Megabus spokeswoman Amanda Byers said all buses in the fleet undergo maintenance checks — including tires — every 10 days. She said the bus involved in the crash passed a "full preventative maintenance check" within the past week.

The bus was traveling from Chicago to St. Louis and Columbia, Mo., then on to Kansas City, Mo. Byers said uninjured passengers all were driven to their destinations except for those picked up by friends or relatives.

Avhad, 25, a native of Mumbai, India, was traveling with her parents. Avhad was seated in the front row of the upper level of the bus, directly above the driver, Kink said. They were en route to Columbia, where the university is located.

Students, faculty and administrators remembered Avhad as very bright and cheerful, a 4.0 student on scholarship in the Health Administration Program that is part of the university's School of Medicine. She was on track to earn her master's degree next year.

"We have lost a wonderful, dear friend," said Nikhil Tindal, president of the university's Cultural Association of India, of which Avhad was a member. "Aditi was a girl who was always smiling and brought so much joy to us all."

Some have called for tougher regulation after a string of accidents involving low-fare buses, including a September 2010 wreck near downtown Syracuse, N.Y., involving another double-decker Megabus. Four people died when the bus slammed into a low bridge. The driver was acquitted earlier this year of homicide.

Fifteen people were killed in May 2011 when a bus swerved off Interstate 95 in New York City and was sliced in two. Two days later, another bus drove off the New Jersey Turnpike and struck a bridge support, killing the driver and passenger.

The Federal Motor Carrier Safety Administration said Megabus USA LLC has earned a satisfactory rating, meaning it meets all requirements. There is no higher rating.

Megabus drivers are required to take nine hours off between scheduled driving duties, the company said, which is stricter than federal requirements. The drivers also go through what the company called extensive classroom and behind-the-wheel training.