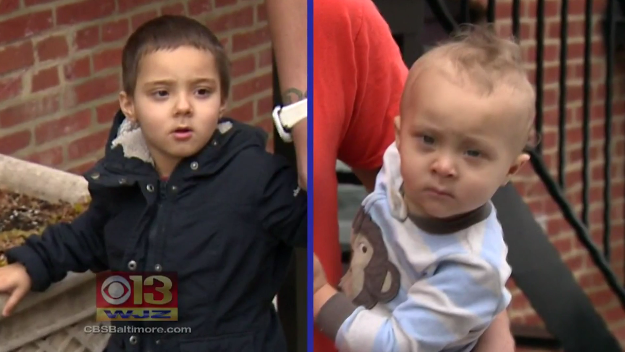 BALTIMORE -- Police have arrested a suspect wanted for carjacking a vehicle with children still inside. The children were found a short time later, CBS Baltimore reported.

Baltimore police said 37-year-old repeat offender John Bowling was taken into custody by patrol officers just before Friday night. They posted his picture with the word “CAPTURED” on social media.

It’s an opportunity Eric O’Neill thought might never come again -- a chance to hold his kids after they were kidnapped on Thursday night.

The heart-pounding moments unfolded along North Port Street, near Patterson Park, when the children’s mother was unloading things from her car and left it running with her 4-year-old and 19-month old boys still inside. The keys were still in the ignition, CBS Baltimore reported on Thursday.

Video obtained by CBS Baltimore showed the thief casually entering the vehicle -- a 2007 Saturn Ion -- and then taking off.

“I got a phone call by my wife. The kids were gone and I just sped home,” O’Neill said.

Police quickly issued an Amber Alert and the two children were safely found a few blocks away.

The whole thing played out in about in hour.

Police say that if it wasn’t for a neighbor’s surveillance camera, the story could have had a much different ending.

“Once we get that photograph, it gives us an idea of who we’re looking for, but more importantly it gives the community an idea,” said Baltimore Police spokesman Jeremy Silbert.

The suspect, Bowling, of Dundalk, has a lengthy criminal history. He is being charged with kidnapping, reckless endangerment and auto theft.

O’Neill is thankful to police and the community for getting his kids back home.

“Baltimore has a lot of love. People just come in and mess it up,” he said.