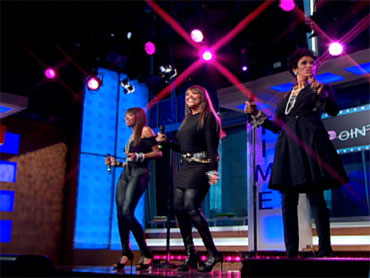 "The Early Show" "traveled" back in time to 1983 in the "Time Machine" series. And what group was burning up the airwaves that year?

A trio of sisters, Anita, June and Ruth Pointer, comprised this feel-good group of the '80s. If you turned on the radio, chances are you wouldn't have to wait long before you felt like dancing.

"You feel part of the song," Mitchell said. "I think that's what they brought to the table."

Director Jerry Bruckheimer told CBS News The Pointers Sisters' song played over the big chase scene was "part of the fabric of the film."

The Pointer Sisters were also history makers. Their success landed them on MTV. They became one of the first African-American acts to be played in heavy rotation on the channel.

The Pointer Sisters group has also changed over the years. Since June Pointer's death three years ago, the family affair continues thanks to Ruth's granddaughter Sadako Johnson, who joined the group in recent months.

Johnson, who wasn't even alive when The Pointers Sisters songs were hits, said she has big stilettos to fill.

The group continues to play their hits, including "I'm So Excited," which wasn't even going to be released by their record company.

However, Anita Pointer said she fought for the song to be released. Now, Anita said, the song is the group's most well-known anthem.