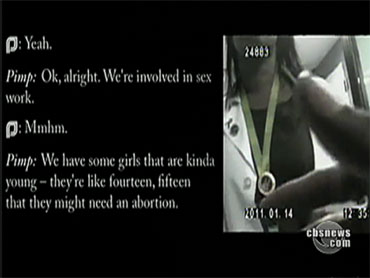 In Washington Tuesday the House began hearings on the controversial subject of abortion. House Republicans have proposed two bills that would add restrictions to federal funding for abortions.

Senate Democrats called the bills a distraction from their top priority, the economy, and they vowed to defeat the bills if they pass in the House.

Planned Parenthood has long been criticized by abortion rights opponents. The organization has 800 clinics across the United States. Recently a handful of them were targeted by a video sting.

Pimp: "We have some girls that are kind of young like, 14, 15, that they might need an abortion."

Pimp: "And, how is the best way should they could go about it?"

In the past week anti-abortion group Live Action has released undercover videos showing Planned Parenthood staffers all too eager to help purported teenage sex workers get abortions and contraception.

Planned Parenthood Supervisor: "Here's the thing. If they're minors, just tell them to put down that they're students."

Planned Parenthood Supervisor: "Yeah, just kind of play along that they're students. We want to make it look as legit as possible."

Planned Parenthood has fired one worker in the videos and said it will retrain its staff. It reported the incidents to U.S. Attorney General Eric Holder and CBS News has learned the FBI is now investigating.

"Live Action is a political operation. It is against legal abortion in the United States. It is an extreme group," says Stuart Schear of the Planned Parenthood Federation of America.

Live Action's leader is 22-year-old Lila Rose who founded the group when she was 15. She once went to Planned Parenthood posing as a 13-year-old girl who said she was pregnant by a 31-year-old man.

The latest undercover sting is being made public as Congress takes up the "No Taxpayer Funding for Abortion Act." Republicans in the House want to cut Planned Parenthood's $300 million in federal funding.

"The time has come to deny all federal funding to Planned Parenthood of America," says Rep. Mike Pence (R-Ind.)

In the past, Rose has worked with James O'Keefe - whose undercover videos led to Congress cutting funding for the community organizing group ACORN. Rose hopes her videos will end federal funding for Planned Parenthood. Her ultimate goal is to see abortion outlawed.