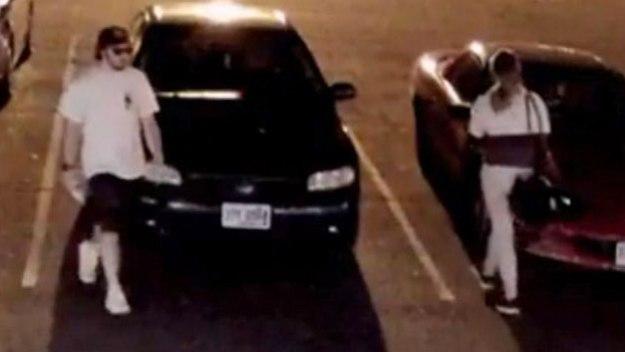 ROCHESTER, N.H. – A terrifying attack was caught on surveillance video in the parking lot of a Planet Fitness in Rochester, New Hampshire.

CBS Boston reports the video shows a man get out of his car and attack 18-year-old Erin McCarthy from behind at about 10:00 p.m. on June 12.

The tape stops after the first strike but police said the man punched her 39 times and threw her to the ground.

"He just kind of came up and hit me in the back of the head and wouldn't stop," said McCarthy. "He didn't say a word and he didn't have a reason behind it. I asked 'Why? Who are you?'"

Authorities say that the attacker waited outside for McCarthy, a Planet Fitness employee, for nearly the entirety of her eight hour shift.

The victim did not sustain major injuries despite the multiple blows.

"I mean, he threw me around like a rag doll, so I kind of just let it happen," said McCarthy.

Police are now seeking the public's help in searching for the man.

Authorities believe the vehicle he fled in was a light colored Ford Fusion or similar vehicle.

McCarthy isn't ruling out the possibility that her assailant was a gym customer who perhaps had some beef with her, but says she didn't recognize him through his dark glasses.

"Obviously he was trying to disguise himself to a point so that nobody could identify him," said Rochester Police Lt. Jeremy Aucoin.

Police are hoping a tipster will now do just that.

And while Erin certainly wants that, she wouldn't mind getting even. "I want to beat the crap out of him, definitely, but that's about it," McCarthy said.

Planet Fitness released a statement saying they are working with local authorities and are committed to assisting however they can in the search.