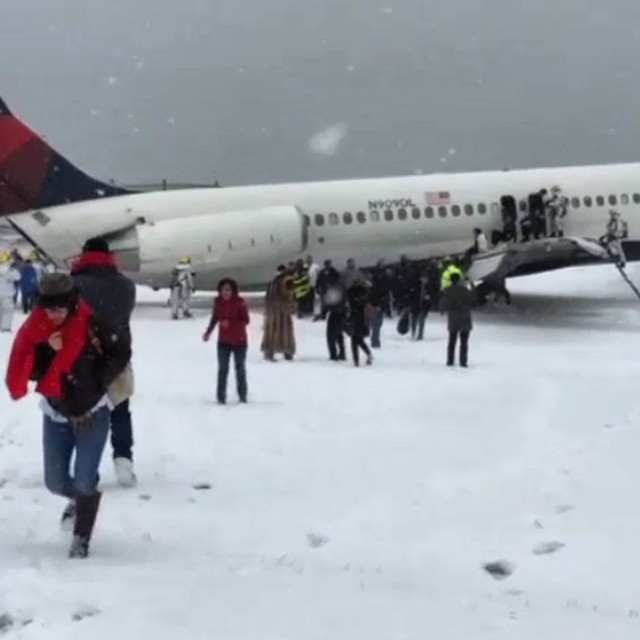 NEW YORK -- A Delta plane from Atlanta skidded off a runway at LaGuardia Airport while landing during a snowstorm Thursday and crashed through a chain-link fence, its nose coming to rest perilously close to the icy waters of a bay.

The nose was leaning on a berm that separates the runway from Flushing Bay. Passengers saddled with bags and bundled up in heavy coats and scarves were helped down from the wing and onto the snowy pavement, just feet from the water. Everyone was silent as the plane slid, but some children started crying after it came to a stop, passengers said.

"If we wouldn't have hit the snowbank, we'd be in the water right now," said Charles Runels, a passenger from Atlanta.

"We thought that we were in the water, everybody thought it was in the water and then they opened the back door and all the snow and things fell out and then the firemen came around helping everybody," another passenger told CBS New York.

Flight 1086, carrying 127 passengers and five crew members, veered off the runway at around 11:10 a.m., authorities said. Six people had non-life-threatening injuries, and at least two were taken to the hospital, according to the Port Authority of New York and New Jersey, which runs the airport.

Passengers at LaGuardia took to social media to post video and images of the incident:

Malcolm Duckett, a marketing executive from Georgia, said passengers were told they had to exit over the wing because the front door was too close to the water.

"We landed pretty hard. I could see the damage to the wing. It was pretty torn up," he said. "It was riding across a fence for 10 seconds, and once we landed, we landed in the snow."

Duckett, who was seated near the left wing, said he could see the damaged wing. He climbed onto the right wing and then slid along it until firefighters helped him get down.

"As we walked across the runway, it was covered with so much snow that I was wondering who decided it was safe to land here," said Jane Kaufman, of Gainesville, Florida, who was visiting her daughter in Brooklyn.

Passengers trudged through the snow in an orderly line after climbing off the plane. The Port Authority said that the plane's emergency chutes did not deploy.

Scott Brenner, a former FAA assistant administrator, told CBSN that the fact that chutes did not deploy on the plane is "absolutely shocking."

"The plane did not make contact with the water," Foye said. "Happily, that was not a risk today."

Foye says the pilot did everything he could to slow the aircraft. Both runways closed after the crash, but one reopened at 2 p.m.

The plane's wings appeared to be damaged in the crash landing and the aircraft was leaking a gallon of fuel a minute afterward, but the leak has since stopped, Foye said.

Among the passengers was New York Giants tight end Larry Donnell, who said he felt blessed to be safe after the scary landing.

"I feel fine physically and hopefully all the other passengers did not have any significant injuries," Donnell said in an email. "We were all shocked and alarmed when the plane started to skid, but most importantly, as far as I know, all of the passengers and flight crew were able to exit the plane safely."

Michael J. Moritz Jr., a well-known Broadway producer, said he was commenting on the heavy snow on the runway when the plane came in for a landing.

"Landing looked normal, didn't look abnormally rough at all," Moritz wrote in an email. "Once on the ground, the plane lost control very quickly, visibility was low."

"CBS This Morning" co-host Norah O'Donnell said she was on a different flight at the airport at the time of the incident.

"I was about to take off when the pilot came on the intercom and said, 'Ladies and gentleman some terrible news, there has been an accident here at LaGuardia,'" O'Donnell told CBS New York.

O'Donnell and fellow passengers sat on the runway for about 30 minutes before deplaning. She then spoke to several passengers who were on the plane that skidded off the runway.

"We were very close to ending up in the water," passenger Tim Moore told O'Donnell.

The National Transportation Safety Board is sending an investigator to retrieve the plane's flight data and cockpit voice recorders and to document damage to the plane, said spokeswoman Kelly Nantel.

The Delta flight was landing on LaGuardia's main runway - a stretch of pavement that is 7,003 feet long and 150 feet wide. On the right side of the runway are a taxiway and the airport terminals. On the left is a berm, fence and Flushing Bay.

In 2005, a safety buffer was added to the end of the runway at LaGuardia, according to the Federal Aviation Administration. It was updated just last year. Called an engineered material arresting system, the buffer is typically a crushable material that can extend 1,000 feet beyond the runway. It is designed to slow or stop a plane that overruns, undershoots or veers off the side of the runway.

The tires of the aircraft sink into the lightweight material and the aircraft is slows as it rolls through the material.

In the case of Flight 1086, it appears that the jet didn't end in the buffer zone but instead veered off the runway and into the berm separating the airport from Flushing Bay.

LaGuardia is one of the most congested airports in the U.S. It's also one of the more difficult ones to land at because of its close proximity to three other busy airports. When rain or snow reduces visibility, the number of landings slows down. The same occurs during high winds.

John M. Cox, who spent 25 years flying for US Airways and is now CEO of consultancy Safety Operating Systems, notes that LaGuardia's runway is "reasonably short" but still safe.

At airports with longer runways, pilots will glide a few feet above the runway and gently touchdown. At LaGuardia, "you put the airplane on the ground and stop it."

"You're concentrating on getting your plane on the runway and stopped," Cox says.

The airport has had its share of planes mishaps. In July 2013, the front landing gear of a Southwest Airlines flight arriving at the airport collapsed right after the plane touched down on the runway, sending the aircraft skidding before it came to a halt. Ten passengers had minor injuries.