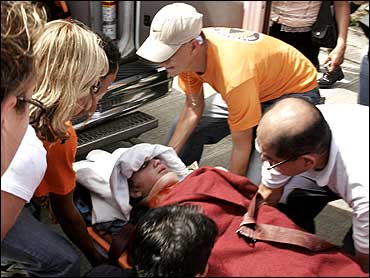 A 12-year-old U.S. girl who was the sole survivor of a weekend plane crash was reunited with her family Wednesday after rescuers trekking for five hours carried her down from the wreckage in a remote mountain area and airlifted her to a hospital.

Francesca Lewis, wearing a neck brace and with one arm bandaged, met with anxious family members at a hospital in the town of David, capital of the province of Chiriqui, 30 miles east of the crash site.

"She apparently has some fractures, but she is stable and talking," Dr. Manuel de la Cruz said.

Francesca's mother, father, uncle and sister came down from the United States to care for her. Kim Klein, whose ex-husband and daughter died in the crash, also was in Panama as her search for the missing plane became an effort to recover their bodies.

Earlier Wednesday, her mother, Valerie Lewis told the AP her daughter could walk, but had apparently suffered a broken arm and hypothermia.

"My husband spoke to her by phone this morning," Lewis said. "She sounded good. She just said 'Hi, daddy. See you soon."'

Rescue workers struggled for five hours against heavy rains and high-altitude winds to carry Francesca by stretcher from the site of the plane crash, high on the 3,500-foot, jungle-laden Baru volcano, down to a spot where a helicopter could land, Chiriqui Civil Protection Director Armando Palacios told The Associated Press.

A preliminary investigation showed the plane struck a tree and split in two, according to National Civil Protection Director Roberto Velasquez.

"It is miraculous that the girl could survive that impact," he said.

Michael Klein was the chief executive officer of Pacificor LLC, a Santa Barbara-based company that manages several hedge funds. He founded two companies in the 1990s before becoming president and CEO of eGroups Inc., which was the world's largest group e-mail communication service. Yahoo Inc. purchased eGroups for $450 million (euro495 million) in August 2000 and it is now known as Yahoo Groups.

Aviation authorities said the cause of the crash was not yet known, but Panama's RPC radio reported that witnesses saw the plane flying at a very low altitude around noon Sunday amid buffeting winds.

Michael Klein was on vacation with the two girls at an eco-resort he owns in the Central American nation, according to Kim Klein. The three had been scheduled to return to Santa Barbara, California, on Monday, she told the AP on Tuesday.

Their plane disappeared after departing from Islas Secas off Panama's Pacific coast, heading for the Chiriqui volcano, about 285 miles (460 kilometers) west of the capital.

A colleague described Klein as a brilliant businessman who skipped high school and graduated from college at age 17.

"One of the most interesting people you could ever speak to on any ... myriad of subjects," Kurt Benjamin, the vice president of business development at Pacificor, told KNBC-TV in Los Angeles. "He's just an unbelievable individual."

Benjamin said Klein was close to his daughter.

"Her father was so proud of her," he said. "She was an amazing, accomplished horseback rider - just an absolute winner. Solid, solid young girl."

Klein, his daughter, and her friend left Santa Barbara on Thursday night to visit Klein's eco-resort on Islas Secas, with plans to return home in time for Christmas Eve, said Kurt Benjamin, a colleague of Klein's and vice president of Business Development for Pacificor in Santa Barbara, where Michael Klein was the chief investment officer.

Benjamin said the group was on its way to the city of David, where they were going to spend Sunday night at a coffee farm before flying back to Panama City and then home, reports the Times.