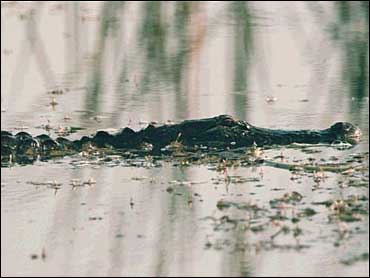 A historic land deal aimed at helping restore the dying Everglades, and lauded by Gov. Charlie Crist as "monumental as the creation of our nation's first national park," may end up dead in the water.

The state of Florida is currently working to secure financing so it can buy 180,000 acres of land in the Everglades from U.S. Sugar Corp., the nation's largest producer of cane sugar, for $1.34 billion.

The company agreed last year to sell its nearly 300 square miles of farmland to Florida, which wants to use some of it for environmental restoration and do away with acres of agriculture that have long been blamed for polluting the Everglades ecosystem.

The state is hoping to secure financing by the summer, but it must first win court approval to issue bonds after several opponents challenged the project. If the state does eventually get approval, it may then be difficult to find investors to finance the bonds, given the nation's tight credit markets. But state officials have said they're hoping the economy recovers a bit before they begin that process.

In the meantime, U.S. Sugar is still entertaining bids from competitors, putting the state deal in jeopardy.

A 60-day period during which U.S. Sugar was required to take bids - and could seek out bids - ended Monday. However, the company can continue to entertain unsolicited bids until the state can issue bonds.

One is a Tennessee-based farming company, The Lawrence Group, that is seeking to undercut the state contract.

"It's a very active time right now," Coker said. "If an offer is better than the state's, then the state will have an opportunity to come back in and match that offer. If they choose not to match that offer, then we can pay a breakup fee and walk away."

That means U.S. Sugar, under the terms of a contract signed last year with the state, pays $40 million and the much-hyped deal is off.

Kirk Fordham, CEO of the Everglades Foundation, said he believes the deal will eventually go through, but predicted dire consequences if it doesn't.

"If a third party buys U.S. Sugar and undercuts the state, in all likelihood, the opportunity to restore the Everglades as we've envisioned here might be forever lost," Fordham said. "It's possible that any new land owner could conceivably chop it up for development, rock mining and other agricultural purposes that would leave Everglades restoration in the dust."

For its part, The Lawrence Group has said it would work with the state to sell some land needed for restoration, while keeping jobs and farmland in production.

The South Florida Water Management District, charged with overseeing Everglades restoration, said their agency remains committed to the deal. The governor's office did not respond to telephone calls and e-mails seeking comment.

"The district has a contract with U.S. Sugar and is moving forward with the responsibilities under the terms of the contract," the agency said in a statement. "The district is not a party to discussions with other groups. At this point, speculation would be premature."

Under the proposal, the state would buy U.S. Sugar's land, but the company would keep its assets, including its mill, railroad lines and citrus processing plant.

U.S. Sugar would be allowed to lease back the farmland at $50 per acre annually for seven years or more before turning it over to the state.

Florida Crystals, the state's second largest sugar producer and part owner of such well-known brands as Domino Sugar, has fought the state deal at every turn, claiming that the lease deal is below market value and gives an unfair business advantage to its competitor.

However, at the same time, Florida Crystals is in talks with U.S. Sugar to potentially purchase its assets, but only if a large chunk of the land is left in agriculture.

"It all comes down to one number, and that number is how much land are you going to leave in production," said Florida Crystals Vice President Gaston Cantens. "If you don't have sugar cane to feed the mill, then the mill shuts down."

Cantens said his company has no interest in trying undercut the state contract, and would never pay $1.34 billion for U.S. Sugar, as the state intends. He also said Florida Crystals is prepared to work with the state on any land swaps that may be needed for restoration efforts.

However, if the state deal fails, Cantens said, Florida Crystals may be interested.

"There isn't a sugar asset in the world that we wouldn't consider buying," he said.

As for the current deal, Cantens said, "We're adamantly opposed," citing a land leaseback rate "that is well below market ... That is just wrong."

Lawmakers and other sugar growers in the region have also questioned the state deal, citing the high cost to taxpayers and what some see as the unfair competitive edge to U.S. Sugar.

Meanwhile, U.S. Sugar said Tuesday its board had adopted a shareholder rights plan, also known as a "poison pill," in order to ward off a hostile takeover. If a party was to acquire 15 percent of U.S. Sugar's stock against the wishes of the board, the company could essentially double the number of shares held by remaining shareholders - thereby diluting that 15 percent to about 8 percent and lessening the hostile party's control.

U.S. Sugar's board "felt strongly they wanted to make sure they're in control of this process," U.S. Sugar's Coker said.