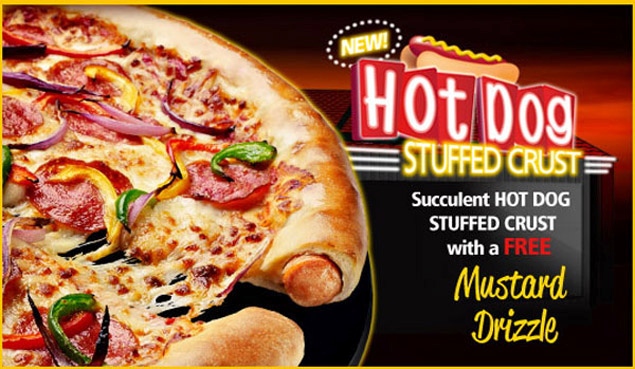 Pizza Hut restaurants in the U.K. will now offer a "Hot Dog Stuffed Crust" pizza with a mustard drizzle. Sorry America, you won't see it on this side of the Atlantic any time soon.

"The Hot Dog Stuffed Crust pizza is only available in the UK and there are no plans to introduce this product in the U.S.," Lisa Beachy, a spokesperson for Pizza Hut, told HealthPop in an email.

This isn't the only new offering from a fast food restaurant to raise eyebrows.

In the U.S., specifically Nashville, Tenn., Burger King is testing a "Bacon Sundae," food blog Grub Grade reported. The sundae appears to come with standard toppings such as fudge and caramel, but also includes a strip of bacon. The blog reports that the product is similar to a "Maple Bacon Sundae" sold at Denny's. According to Eater, Jack in the Box also unveiled a "Bacon Shake" earlier this year.

Burger King has no plans at the times to release the sundae nationally.

"As part of Burger King Corp.'s normal course of business, the company is currently testing menu items in a small sampling of U.S. restaurants located in the Nashville, TN area," Burger King spokesperson Randi Farynyk told HealthPop by email. "The brand does not have plans to expand the test to additional markets at this time." Nutritional information could not be provided since the food will not be sold nationally.

Earlier this month, Burger King said it would revamp its menu to be healthier, launching 10 new items such as smoothies and wraps, CBS Moneywatchreported.

Would you try a pizza with a hot dog crust, or a bacon sundae?