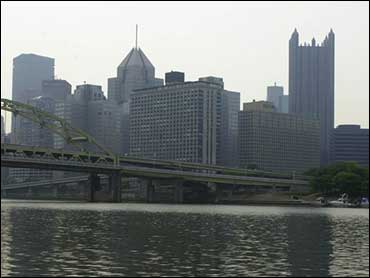 A city outside California has for the first time been named the sootiest in the nation, one of the categories the American Lung Association uses to determine the most polluted cities in the country.

"It's not that Pittsburgh has gotten worse; it's that Los Angeles has gotten better," Nolen said. "If the trend continues, Pittsburgh will top two lists, and L.A. will only be leading the nation in ozone."

Still, Los Angeles held its own in two other categories measuring year-round soot levels and smog. And statewide, 26 of California's 52 counties with air quality monitoring stations got failing grades for having either high ozone days or particle pollution days.

The association's "State of the Air: 2008" report, being released Thursday, was based on air quality measurements reported to the U.S. Environmental Protection Agency by state and local agencies between 2004 and 2006. The study looks at three key pollution measures.

The eight metropolitan areas considered to be the nation's most polluted by every measure were Los Angeles, Bakersfield, Fresno, Visalia-Porterfield and Hanford-Corcoran, all in California; Washington-Baltimore; St. Louis; and Birmingham, Ala.

The cleanest cities were Fargo, N.D., and Salinas, Calif.

The rankings were based on ozone pollution levels produced when heat and sunlight come into contact with pollutants from power plants, cars, refineries and other sources. The lung association also studied particle pollution levels emitted from these sources, which are made up of a mix of tiny solid and liquid particles in the air.

The study found that about 42 percent of residents nationwide live in counties with high levels of particle or ozone pollution.

"When you think of the impact of ozone on our respiratory tracts, imagine putting acid right in your eye. It's that corrosive," said Tony Gerber, a pulmonary specialist and assistant professor at the University of California, San Francisco. "This corrosiveness causes severe irritation and leads to problems like asthma attacks, coughing, wheezing, chest pain and even death."