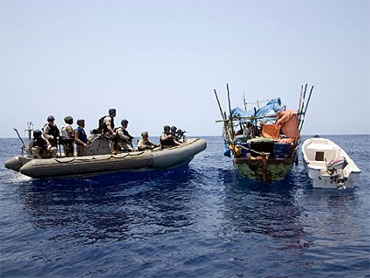 World powers including the U.S., Russia and China are teaming up at sea to tackle the pirates plaguing Somalia's lawless coast, as a sharp increase in attacks has forced nations who may be rivals on land to make unlikely alliances.

Analysts say the shift from competition to co-operation is also helping to safeguard naval budgets in countries like the United States and Britain that are fighting land-based wars in Iraq and Afghanistan.

"It's remarkable you have in what is generally considered not to be the most strategically important corner of the Earth, you have the Chinese, the Russians, the Americans, the Indians, all working together against a common enemy," said piracy expert Roger Middleton from the London-based think-tank Chatham House.

"They've been trained to fight each other, not small enemies," he said.

Pirates have launched increasingly bold attacks against vessels in the Indian Ocean and Gulf of Aden in hopes of capturing a ship and crew and collecting millions of dollars in ransom. They currently hold nearly 250 hostages from around the world, including a British couple taken last month. Three ships have been seized in the last week alone.

Lt. Nate Christensen of the Bahrain-based U.S. Fifth Fleet said 25 ships from 14 nations are now patrolling the Gulf of Aden and Indian Ocean.

Russia and China announced in September that they would be doing joint anti-piracy patrols under "Operation Blue Shield," and many nonaligned countries such as Japan or South Korea also have sent ships to the region. Russia is also supporting the NATO patrols.

Cmdr. James Kraska, a professor at America's Center for Naval Warfare Studies, says all except Iran are sharing information and protection.

Major players in the region meet once a month to share information and to deconflict areas of responsibility. Last week, navies from 26 nations, including from the EU, NATO, China, India, Japan and Russia met. Ukraine participated for the first time.

"The bottom line is that the way we describe it is unprecedented co-operation between all anti-piracy players in the Gulf," said Cmdr. John Harbour, spokesman for the EU Naval Force.

The effort is not always trouble-free. The U.S., India and Pakistan all have non-compatible cryptography equipment, said Christensen. And the Chinese and Americans have been forbidden to communicate using their official military email addresses because of fears of espionage, so the crews email each other using Yahoo or Hotmail addresses, Middleton said.

Nations have managed to overcome obstacles to help each other, even if their governments are at loggerheads on land. Last May, a South Korean warship sent a helicopter to help the North Korean cargo ship Dabaksol when it was under attack.

In September, the Turkish frigate TCG Gediz pursued pirates attacking the Greek-owned bulk carrier Handy V, despite the fact negotiations between Turkey and Greece over the disputed island of Cyprus have broken down repeatedly.

"No nation can do it alone," Krasaka said.

It may be easier for naval forces to co-operate than land forces. The traditional mariner's code states sailors are obligated to help another ship in trouble, and no one has a territorial claim on the seas.

Even working together the warships cannot prevent all attacks. The Indian Ocean and Gulf of Aden are simply too vast. Analysts say the lure of multimillion dollar ransoms is too strong for men in Somalia, a war-ravaged country that hasn't had a stable government for a generation and where nearly half the population is dependent on aid.

On Wednesday, the European Union Naval Force said that Somali pirates had seized a cargo ship in the Indian Ocean with 22 crew members on board.

Naval spokesman Cmdr. John Harbour said that there are three Greeks and 19 Filipinos among the crew of the Greek-owned Filitsa. The ship is registered in the Marshall Islands.

A press release by the EU said the ship was taken 400 miles northeast of the island nation of the Seychelles. It had been heading for the South African port of Durban but has now turned around and is heading north.

Also on the Net: