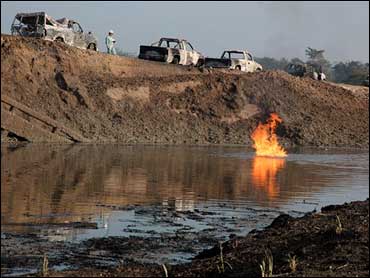 A series of explosions at a natural gas pipeline killed two people and set fire to houses, cars and cattle in rural southeastern Mexico.

Hundreds of residents from four villages fled Friday night or were evacuated at the sound of a gas leak before a series of explosions in the area. Flames and leaks were brought under control Saturday morning.

"We were getting ready to evacuate when the explosion overtook us," said Matilde Torres, who carried away her daughter. "We ran without stopping. And behind us, the flames were coming."

The blasts killed a 64-year-old woman, and a 24-year-old man died from his injuries on Saturday.

Dozens of people were transported to hospitals in Comalcalco and Villahermosa, where 13 people were being treated for severe injuries, according to Pemex.

Pemex has suffered a series of spills, leaks and explosions in recent months, exposing the company's neglected, aging infrastructure.

In April, a private repair company contracted by Pemex caused a release of gas that killed six workers and forced the evacuation of thousands of residents of Nanchital. Nanchital was also the site of a December oil spill that released 5,000 barrels of crude into the Coatzacoalcos River feeding the southern Gulf of Mexico.