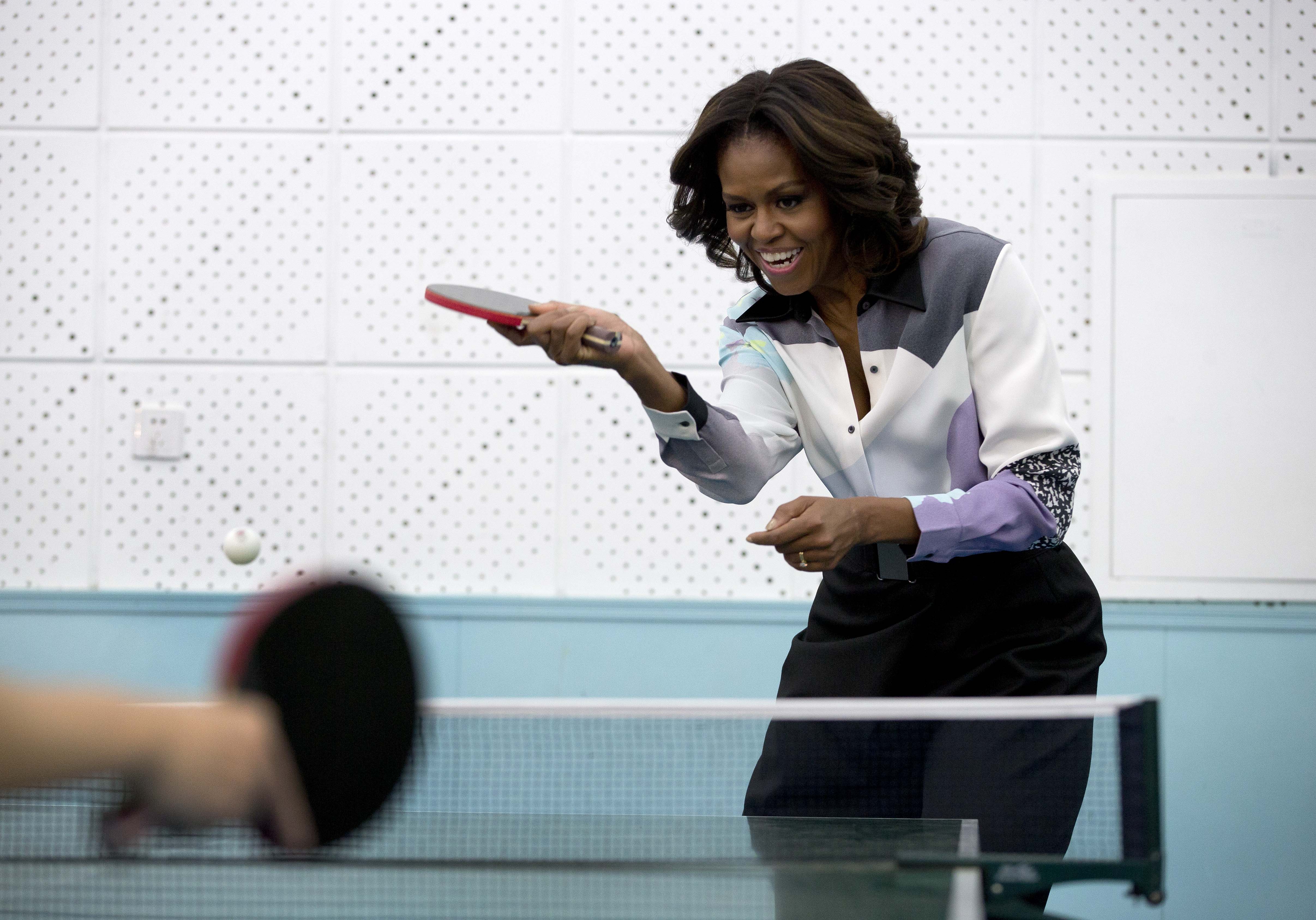 Kicking off a goodwill visit focused on cultural diplomacy, first lady Michelle Obama joined her Chinese counterpart to tour a school in Beijing on Friday and try her hand at some table tennis and some calligraphy.

Obama, who was joined on her first solo trip to China by daughters Malia and Sasha and her mother Marianne Robinson, was hosted by Peng Liyuan, the wife of Chinese President Xi Jinping and a celebrated singer in her own right.

At the Beijing Normal School, a specialized institution that prepares Chinese students for university studies abroad, Peng extended a "warm welcome" to Obama.

"In China, we have an ancient idiom, which means that when two people meet for the first time, they may feel as if they have known each other for many years," Peng said.

Obama said that her visit was "an honor and a privilege."

"The relationships between the United States and China couldn't be more important," she said, "and having the opportunity to travel here, to listen, to learn, to hear more about the education initiatives here in this country and to share my travels with students throughout the United States is a very unique experience, and it's one that I will never forget."

Obama is expected to largely steer clear of politics on her trip, focusing instead of education and cultural ties between the U.S. and China.

"We believe that this visit will play an important role in increasing mutual understanding between the two countries and expanding friendship," Chinese Foreign Ministry spokesman Hong Lei told reporters before Obama's arrival, according to Reuters.

The two first ladies observed a robotics workshop at the school before taking part in a calligraphy class, where Obama poked fun at her own attempt to draw the ancient Chinese characters.

"I'll make you look good," she told her student tutor. "I'll be here forever until I get it right."

Obama and Peng were later ushered to a table tennis practice session, where six pairs of students squared off against one another.

One of the instructors asked Obama if she'd like to play, and she leapt at the opportunity.

"Alright, wait," she said. "How do I hold the paddle properly?"

After a few volleys, Obama finished her game as the students applauded.

"My husband plays," she said before leaving. "He thinks he's better than he really is. I could stay here all day."

Before a scheduled dinner, the first ladies also toured Beijing's Forbidden City, which was the seat of imperial Chinese power for almost 500 years.

At dusk, the first lady retreated to a guesthouse to prepare for dinner, and she was greeted there by Chinese President Xi Jinping.

"I cherish my sound working relationship and personal friendship I already established with your husband," Xi told Mrs. Obama through a translator. "We stay in close touch between phone conversations and correspondence."

Xi told the first lady that he looks forward to his bilateral discussions with President Obama at a pair of upcoming summits.

Michelle Obama thanked Xi for the warm welcome she'd received. "We have a had a wonderful first day here in China. I tried my hand at ping pong. Not so good," she said as Xi smiled.