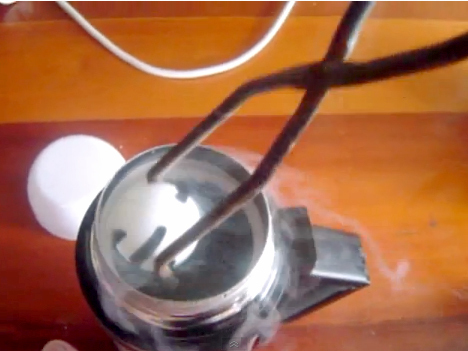 (CBS News) If you've played a little ping-pong (or "table tennis," if you will), then you probably know that getting some spin on the ball can often be key to winning. Well, as it turns out, once you dip a ping-pong ball into liquid nitrogen, you won't have to worry about spin anymore...

Now whether or not you can still play a game at all with that particular ball is a totally different question. The fascinating, chemistry experiment was posted by YouTube user makend0, who also wrote an article explaining the process and suggests the following opening:

Tell the audience only that you're immersing a ping-pong ball in liquid nitrogen. Ask them to predict what will happen (a good guess would be that it will collapse in on itself). The unexpected result will give them a good opportunity to apply some bits of knowledge they possess (depending on their age: that liquid nitrogen is very cold, and at its boiling point; that a gas has a much greater volume than a liquid; how a jet works/conservation of momentum; that water droplets are visible but water vapor is not) and to analyze the problem (they should be able to figure out that the ball has a hole in it, and that the hole has particular characteristics). You can guide them to the solution by being as vague or explicit as you need to be based on how much time you have, but I recommend allowing them to closely inspect the ball only once they have deduced the existence of the hole. Temporize by repeating the demonstration.

A fun demonstration that has earned a triple-rainbow salute of  wacky and wild science from us here at The Feed! To learn more about the process, be sure to click here to see the article on it. And for more videos from makend0, you can click here to go to his YouTube page.