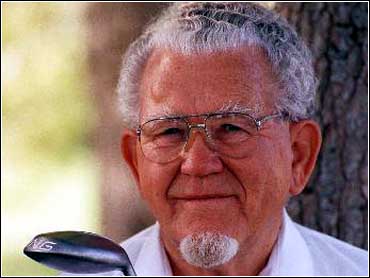 Karsten Solheim, who invented a putter with a "Ping" that led him to establish one of the most successful golf equipment companies, died Wednesday in Phoenix, Ariz., of complications from Parkinson's disease, his company said. He was 88.

The founder of Karsten Manufacturing Corp. and the creator of the Ping golf clubs, Solheim was the first to develop perimeter-weight irons, and his popular brand of putters have been used to win more than 1,800 professional events around the world.

He also gave women's golf an international presence by sponsoring the Solheim Cup, biennial matches patterned after the Ryder Cup.

"He paved the way for all of us," said Ely Callaway, founder of Callaway Golf. "He was a great pioneer. He designed the first clubs that varied from conventional golf club design. He changed it all, and we give him a lot of credit for that."

"Perhaps no individual has had as profound as impact on the golf industry as Karsten Solheim," said Ken Lindsay, former president of the PGA of America.

Solheim stepped down as president and CEO of Karsten Manufacturing in 1995 and was succeeded by his son. He had been confined to a wheelchair in recent years because of Parkinson's disease.

He was succeeded by his son, John, who is now chairman of the family business that celebrated its 40th anniversary last year as a company on the leading edge of innovation.

"It's unlikely there will be another era in the golf industry like Karstein Solheim's last 40 years," said Sandy Jones, PGA of Europe chairman. "His dream was to build a better golf club so that golfers could enjoy the game. He more than fulfilled that dream and made the game of golf fun for millions."

Most of the innovations in today's irons and putters were developed by Solheim, a native of Norway who left his job as a mechanical engineer with General Electric not long after he designed his first putter in 1949.

He was the first to use investment casting, aimed at improving the consistency of irons. He also developed the concept of perimeter weighting, which distributes the weight of the iron to the outer edges to increase the sweet spot and allow more room for error.

And it was Solheim who first put an "L" on a high-lofted club that has become part of golf's glossary the lob wedge.

"Knowing that he's helped so many people's golf games just made him feel real good inside," John Solheim said in a May interview.

Among his numerous honors, Solheim in 1996 received the Ernie Sabayrac Award from the PGA of America for lifetime contributions to the golf industry.

It all started with two popsicle sticks glued to two sugar cubes with a shaft in the middle, the model for his 1-A putter that got him started in the business. That first putter made a distinctive "ping" when it made contact with the ball, which gave birth to the name.

After qitting GE to work on clubs, Solheim was looking for an improvement to the blade putter that Arnold Palmer had made so popular in the 1960s.

Solheim sketched the "answer" on a the sleeve of a 78 rpm record a cavity-back design for heel-toe balance and the offset hosel. His wife Louise suggest he remove the "w" so the name would fit on the club, and the Anser putter remains one of the most popular designs.

Ping evolved into much more than putters a series of perimeter-weighted irons, a new model of blades and fairway metals and drivers over the past several years.

But it wasn't always smooth sailing.

Solheim sued the USGA over his use of square grooves in irons. It was settled out of court in 1990, and the PGA Tour backed off its threat to require only V-shaped grooves in competition.

Born Sept. 15, 1911 in Bergen, Norway, Solheim moved to Seattle with his parents as a boy and originally followed his father's footsteps as a shoemaker. But Solheim had visions of becoming a mechanical aeronautical engineer.

He worked on the Fireball jet fighter plane as a flight research engineer in 1945, and later joined Convair as a project engineer for the Atlas missile's first ground guidance system.

He is survived by his wife, Louise, whom he married in 1936; sons John, Allan and Karsten Louis, all of whom work for the company, and a daughter, Sandra, a Ping sales representative in South Dakota.