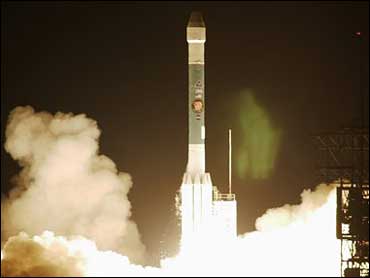 A robotic dirt and ice digger rocketed toward Mars on Saturday, beginning a 422 million-mile journey that NASA hopes will culminate next spring in the first ever landing within the red planet's Arctic Circle.

The Phoenix Mars Lander blasted off before dawn, precisely on time, hurtling through the clear moonlit sky aboard an unmanned Delta rocket. The rocket looked as though it was heading straight for Mars, a bright reddish dot in the eastern sky.

The sky was pitch black and the Delta II rocket created an artificial sunrise along Florida's space coast. It streaked through the sky, at first looking like a fireball, and then, like a comet tail, sounding like continuous thunder in the distance, reports CBS News correspondent Peter King from the Kennedy Space Center.

Just over a minute after launch, six solid rocket boosters dropped off while the Delta continued streaking upward, reports King.

Peter Smith, the mission's principal scientist from the University of Arizona, ran out of the control center just before liftoff to watch from outside and took Mars' visibility as an auspicious sign for the spacecraft.

"It seemed to kind of get the scent there, you know, it was on its way," Smith said with a laugh. "Sort of like a bloodhound, it's going to find Mars."

Other researchers, such as Michael Hecht with NASA's Jet Propulsion Laboratory, jammed the beach. They shouted out the final 10 seconds of the countdown and hooted and hollered "Go, baby!" then toasted with champagne.

Not quite six hours later, the Phoenix Mars Lander was already 365,000 miles from Earth and had settled into a cruising speed of more than 12,000 mph. Everything seemed to be working fine, mission officials said.

If all goes as planned — a big if considering only five of the world's 15 attempts to land on Mars have succeeded — the spacecraft will set down on the Martian Arctic plains on May 25, 2008, and spend three months scooping up soil and ice, analyzing the samples in minuscule ovens and mixing bowls.

The Phoenix Mars Lander won't be looking for evidence of life on Mars but rather traces of organic compounds in the baked and moistened samples, which would be a possible indicator of conditions favorable for life, either now or once upon a time.

If organic compounds are present on Mars, they're more likely to have been preserved in ice. That's why NASA is aiming for the planet's high northern latitudes, where ice is almost certainly lurking just beneath the surface.

Only about six inches of soft red soil should cover the ice, and so the digger shouldn't have to probe too deeply. The ice is expected to be as hard as concrete, and a drill on the scoop will help gather enough frozen samples. Some dirt and ice samples will be baked and their vapors analyzed. Other soil samples will be mixed with onboard water and the muddy soup examined by onboard microscopes.

"We're really going there just to understand whether the conditions might have been hospitable for microbial life at some point," said the University of Arizona's William Boynton, lead scientist for the oven experiment.

Mars landings are especially risky. Only five of the 15 U.S., Russian and European attempts have worked, all of them American successes beginning with the 1976 Viking touchdowns. Given those odds, the Phoenix team said it did everything possible to test for failures and will continue to do so as the spacecraft flies to Mars. The entire mission costs $420 million.

NASA has never attempted to land a spacecraft on Mars at such a high northern latitude. A lander intended for the red planet's South Pole went silent immediately upon arrival in 1999. That failure, combined with the loss of the companion Mars orbiter, prompted NASA to cancel a 2001 lander mission. The parts from that scrapped mission were used for Phoenix, thus its name, which alludes to the mythological bird that rises from its own ashes.

Mars' North Pole would have been too cold for Phoenix to operate, and so scientists opted for a little lower latitude for touchdown. Phoenix will be shooting for 68.35 degrees north latitude, comparable to Greenland or northern Alaska, and 233 degrees east longitude. The lander will parachute down, with pulse thrusters easing its final descent.

Scientists chose the flattest, rock-free zone they could to ensure success. The target landing area is "Kansas flat," according to the spacecraft team, with few if any big rocks that could overturn the stationary three-legged lander or bump against its circular solar panels and jam them. The 772-pound lander will stretch 18 feet across once its solar panels are deployed on Mars, and its weather mast will tower 7 feet.

Phoenix should help pave the way for human visitors, especially if it confirms the presence of water ice in large amounts near the pole, said Michael Meyer, NASA's lead Mars scientist. That would be a tremendous resource, he noted. But if organic matter is indeed found, it could pose a dichotomy: "As Mars gets more interesting, you may not want to send humans right away until you learn out a little bit more about the red planet and find out whether or not life ever got started there."

Science fiction writer Kim Stanley Robinson is thrilled to see another robot headed to Mars and is confident humans will follow. His novel "Green Mars" is one of dozens of writings going up on a disk aboard Phoenix.

"When people get there, they'll be able to do on the ground what maybe 100 robotic missions would have been able to do," Robinson said.