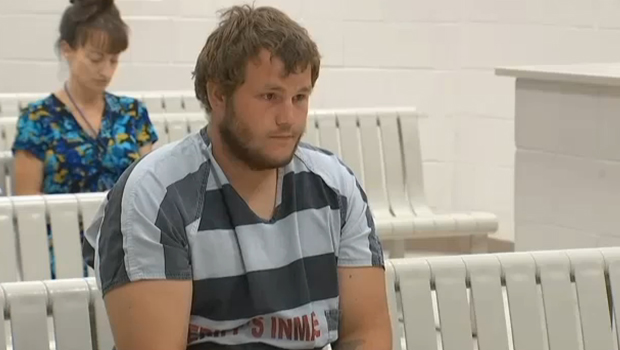 PHOENIX -- A landscaper arrested in a series of Phoenix freeway shootings told a judge Saturday that authorities have "the wrong guy" as investigators stood by their detective work that traced the gun to the suspect after he took it to a pawn shop.

In a brief court appearance, a prosecutor said Merritt should face a high bail after drivers spent the last three weeks on edge.

"The suspect presents a dramatic and profound threat to the community," said Ed Leiter of the Maricopa County attorney's office.

Superior Court Commissioner Lisa Roberts set bail at $1 million, and Merritt, who had remained quiet during the proceedings, asked in a soft-spoken voice to address the court.

"All I have to say is I'm the wrong guy. I tried telling the detectives that. My gun's been in the pawn shop the last two months. I haven't even had access to a weapon," he said as he stood handcuffed in a black-and-white striped jail uniform.

In interviews with CBS affiliate KPHO, Merritt's family denied he was involved in the shootings.

"Whoever thinks my son is the I-10 shooter is a moron," his father, Leslie Merritt Sr., told the station.

Merritt Sr. told The Associated Press he believes his son is being made a scapegoat by police who were desperate to make an arrest under immense public pressure.

"He has way too much value for human life to even take the slightest or remotest risk of actually injuring someone," Merritt Sr. said.

"Leslie is not like that," Cynthia Sauceda, his future mother-in-law, told KPHO. "That's not Leslie. Leslie has a big heart. He would not do this, especially when he's working hard to support his two kids ... He goes to work, and he does everything that he's supposed to be doing."

Merritt was arrested Friday evening after a SWAT team swarmed him at a Walmart in the suburb of Glendale. Minutes later, Arizona Gov. Doug Ducey took to Twitter to proclaim "We got him!"

Arizona Department of Public Safety spokesman Bart Graves said the break in the case was the result of exhaustive investigative work in which detectives test-fired weapons from local pawn shops at the state crime lab and ran ballistics tests.

Graves said a gun Merritt pawned matched the weapon used in four of the freeway shootings on Aug. 29 and 30. A tour bus, an SUV and two cars were hit by bullets on Interstate 10 on those days.

"Today we are seeing the end result of some incredible police work," he said at a news conference.

Graves declined to comment on Merritt's statement in court that his gun was in the pawn shop at the time of the shootings.

A man who identified himself as a manager at Mo-Money Pawn declined to comment Saturday beyond a post on a Facebook page that said detectives contacted the shop Wednesday looking for a certain caliber and make of handgun and examined several weapons.

Eleven cars in all were hit by bullets or other projectiles, such as BBs or pellets, while driving along Phoenix freeways between Aug. 29 and Sept. 10. There have been no serious injuries, although a 13-year-old girl's ear was cut by glass when a bullet shattered a car window.

Milstead said the investigation continues. "Are there others out there? Are there copycats? That is possible," he said.

"There's some elation here that this piece of the pie has been solved, but we are still feverishly working to wrap up all these loose ends," he said.

Merritt Jr.'s Facebook page, confirmed by his father, has two video clips that show him firing guns into the desert toward a palm tree, exclaiming "whoo" after squeezing off a round.

The Facebook page shows a video of the suspect firing a rifle with a young boy at his side. The page also contains a series of pro-gun and anti-government posts.

The Walmart where Merritt Jr. was arrested Friday is six miles north of where some of the shootings occurred along I-10, a major route through the city.

The shootings prompted several school districts to keep their buses off freeways, and some commuters altered their routes.

Sarah Madder, of Phoenix, said she'll stay off I-10 for a few more days despite the arrest.

"It seems like there had to have been more than one person," Madder said Saturday. "If it calms down for a while, I'll get back on."

Meanwhile Friday, a judge ordered the release of a 19-year-old man who was arrested on an alleged probation violation Sept. 11 and questioned regarding the shootings. Authorities have declined to explain the man's connection to the case but said he was not a prime suspect.