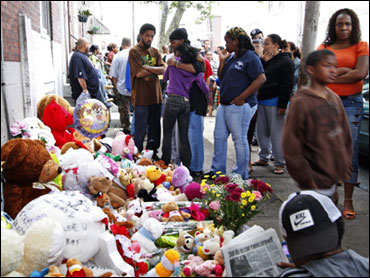 Officers were not chasing a car that jumped a curb, crashed into a crowd and killed a woman and three young children, Philadelphia's police commissioner said Thursday.

Commissioner Charles Ramsey said the officer would have been justified if he had chased the two suspects - one on the motorcycle they were accused of stealing, and one in a car - but he wasn't able to because he was still stuck at the intersection.

"Did a pursuit take place? The answer is no," Ramsey said during a news conference at police headquarters, pointing to the mug shot of one of the suspects. "The fault belongs to the individual you see here."

The driver of the car, Donta Cradock, 18, and the man who fled on the motorcycle, Ivan Rodriguez, 20, have both been charged with armed robbery, assault and related offenses, police said. Capt. James Clark said he expects "more serious charges" will be filed soon.

CBS 3 in Philadelphia reported that both men had also been charged with murder, according to police officials.

The stolen motorcycle was recovered at a suspect's home, reported CBS 3.

The Philadelphia District Attorney's office has charged both Cradock and Rodriguez with four counts of murder each in connection with the carjacking and subsequent accident, according to CBS 3.

Both men had bench warrants out for their arrest, but authorities did not immediately know what for; Ramsey said both had extensive criminal records.

The events started when a witness told the officer he had seen a passenger in a car exit the vehicle and steal a motorcycle at gunpoint around 7:30 p.m. Wednesday. The officer eventually spotted the car matching the witness' description at a traffic light in the Feltonville neighborhood.

The officer pulled up behind the car, turned on his emergency lights and ordered the driver to get out of the car, but the driver sped off, Ramsey said.

The officer wasn't able to pursue the driver immediately because his car was stuck in traffic, Ramsey said; he lost sight of the other car before coming upon the accident scene about a mile away.

Cradock lost control and crashed into the crowd in front of a home, Ramsey said. There were no skid marks at the crash scene, indicating that the driver never tried to brake, Ramsey said.

The car jumped the curb with such force that it badly damaged some concrete steps. It became wedged between a house and a pole.

Cradock was injured and arrested at the scene, and a gun was found in the car, police said. He remained hospitalized Thursday, but police did not release information on his condition.

Rodriguez was arrested at his nearby home, where several weapons were found, police said. Officers were attacked by a dog at the home and had to shoot it but didn't kill it, said police, who recovered two shotguns, two handguns and a rifle there.

The crash killed Latoya Smith, 22; her daughter, Remedy Smith, who would have turned 1 on Friday; Alliyah Griffin, 6, who was Latoya Smith's neice; and Gina Rosario, 7, a neighbor. The accident happened in front of Smith's home.