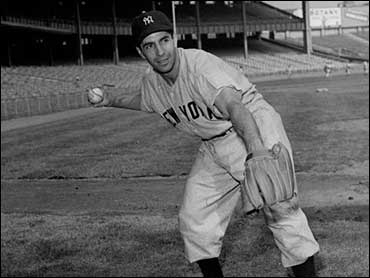 Phil Rizzuto, the Hall of Fame shortstop during the Yankees' dynasty years and beloved by a generation of fans for exclaiming "Holy cow!" as a broadcaster, died Tuesday. He was 89.

His death was confirmed by the Yankees. Rizzuto had been in declining health for several years and was living at a nursing home in West Orange, N.J.

Rizzuto, known as "The Scooter," was the oldest living Hall of Famer. He played for the Yankees during the 1940s and '50s, was a member of World Series championship teams and played in five All-Star games.

Rizzuto was a flashy, diminutive player who could always be counted on for a perfect bunt, a nice slide or a diving catch in a lineup better known for its cornerstone sluggers. He played for 13 seasons alongside the likes of Joe DiMaggio and Mickey Mantle.

He stood just 5-foot-6 but was equipped with a productive bat, sure hands and quick feet that earned him his nickname. A leadoff man, Rizzuto was a superb bunter, a skill used to good advantage by the Yankee teams that won 11 pennants and nine World Series between 1941 and 1956.

Rizzuto tried out with the Brooklyn Dodgers and New York Giants when he was 16, but because of his size was dismissed by Dodgers manager Casey Stengel, who told him to "Go get a shoeshine box." He went on to become one of Stengel's most dependable players.

A Rizzuto bunt, a steal and a DiMaggio hit made up the scoring trademark of the Yankees' golden era, and he played errorless ball in 21 consecutive World Series games. DiMaggio said the shortstop "held the team together."

Rizzuto came to the Yankees in 1941 and batted .307 as a rookie. His career was interrupted by a stint in the Navy during World War II. He returned to the Yankees in 1946 and four years later became the American League MVP. He batted .324 that season with 200 hits, second most in the league. He also went 58 games without an error, making 288 straight plays.

He led all AL shortstops in double plays three times and had a career batting average of .273 with at least a .930 fielding percentage.

After the Yankees released him in 1956, Rizzuto began a second career as a broadcaster, one for which he became at least equally well known.

In his decades on the radio and TV, Rizzuto's favorite phrase was "Holy cow!" It became so common that the team presented him with a cow wearing a halo when they held a day in his honor in 1985. The cow knocked Rizzuto over — and, of course, he shouted, "Holy cow!"

"That thing really hurt," he said. "That big thing stepped right on my shoe and pushed me backwards, like a karate move."

Yankee fans also loved his unusual commentary. In an age of broadcasters who spout statistics and repeat the obvious, Rizzuto delighted in talking about things like his fear of lightning, the style of an umpire's shoes or even the prospect of outfielder Dave Winfield as a candidate for president.

He liked to acknowledge birthdays and anniversaries, read notes from fans, praise the baked delicacies at his favorite restaurant and send messages to old cronies. And if he missed a play, he would scribble "ww" in his scorecard box score. That, he said, meant "wasn't watching."

Despite his qualifications, Rizzuto was passed over for the Hall of Fame 15 times by the writers and 11 times by the old-timers committee. Finally, a persuasive speech by Ted Williams helped push Rizzuto into Cooperstown in 1994.

Williams, a member of the committee, argued that Rizzuto was the man who made the difference between the Yankees and his Red Sox. He was fond of saying, "If we'd had Rizzuto in Boston, we'd have won all those pennants instead of New York."

As in his playing days, Rizzuto was overshadowed by the headliners — teammates like DiMaggio, Mantle, Whitey Ford and Yogi Berra. All of them reached the Hall of Fame before he did.

"I never thought I deserved to be in the Hall of Fame," Rizzuto would say. "The Hall of Fame is for the big guys, pitchers with 100 mph fastballs and hitters who sock homers and drive in a lot of runs. That's the way it always has been and the way it should be."

Old-timers still talk about his suicide squeeze in the ninth inning during the 1951 pennant race to score DiMaggio, beating Cleveland 2-1 and putting the Yankees in first place for the rest of the season.

Rizzuto remembered Aug. 25, 1956, as a day he thought was the "end of the world" — the day Stengel released him to make room for outfielder Enos Slaughter during the Yanks' pennant drive.

"It was Old-Timers Day, and I was out taking pictures, as I did every year," Rizzuto remembered. "The bat boy came over and told me that Casey Stengel and George Weiss wanted to see me in Stengel's office. It was the last day to add a player to the roster and have him eligible for the World Series. We were trading for Enos Slaughter because Stengel said we needed another outfielder, so we had to send someone down to make room on the roster.

"They asked me to read through the list of players and to check each player's eligibility, to see who we could let go," he said. "I sat there thinking that I was a veteran and they wanted my opinion. As we read through the list I pointed out a few players who I thought could be sent down, a pitcher we had hardly used and a catcher who had been in only nine games. But each time they said, 'No, we might need him.' We started to go through the list a second time, and then halfway through it dawned on me."

"The Scooter" was done.

Roof is arguing he was mentally ill when he represented himself at his capital trial.