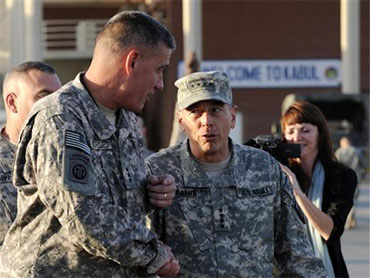 The commander of NATO and U.S. forces in Afghanistan issued updated rules of battle Wednesday, repeating his predecessor's curbs on use of air power and heavy weapons when civilians are at risk but stressing the right of troops to defend themselves.

The new guidance comes after widespread complaints from troops that rules laid down by former commander Gen. Stanley McChrystal were putting them in danger and handing the advantage to the Taliban.

There had been speculation that Gen. David Petraeus - who took over from McChrystal a month ago - might ease the rules. But Petraeus, like McChrystal, emphasized that protecting the Afghan people was the top priority in the war.

"We must continue - indeed, redouble - our efforts to reduce the loss of innocent civilian life to an absolute minimum," Petraeus wrote in the document released by the NATO command Wednesday. Some sections were not released for security reasons, the command said.

McChrystal stressed the need to reduce civilian casualties as a tool for winning the war - noting that every civilian killed the crossfire created a legion of family members with a grudge against NATO forces and motivation to join the Taliban.

Under this guidance, NATO forces drastically restricted the use of airstrikes, which had previously been called in without knowledge of who was inside a building. Troops were also instructed to only fire on people who were actively firing on them.

Though McChrystal's directive did frustrate many soldiers in the field, it also led to a drop in civilian deaths attributed to NATO forces.

Petraeus said nothing in the guidance was meant to hinder the right to self-defense.

"We must employ all assets to ensure our troopers' safety, keeping in mind the importance of protecting the Afghan people as we do," Petraeus wrote.

A spokesman for NATO forces said the directive will help troops understand how to balance the two.

"We also have now an absolutely clear wording and language on the necessary balance between the right of self-defense, the protection of the people, and the assurance of moms and dads back home that their boys and girls absolutely do have the necessary means and measures to achieve mission and success," said NATO spokesman Brig. Gen. Josef Blotz.

The new directive implied that some lower-level commanders had misinterpreted McChrystal's guidance and made rules in their areas more restrictive than needed.

"Subordinate commanders are not authorized to further restrict this guidance without my approval," Petraeus wrote in the document.

Petraeus said the rules were not aimed at slowing the war, but were essential to victory.

"We must continue to demonstrate our resolve to the enemy," Petraeus wrote. "We will do so through our relentless pursuit of the Taliban and others who mean Afghanistan harm, through our compassion for the Afghan people, and through the example we provide to our Afghan partners."

The battle to win over the civilian population is being waged on both sides. The Taliban issued a directive a little over a week ago that calls on their fighters to avoid killing civilians and forbids them from seizing weapons and money.

However, the 69-page Taliban booklet also declares that people working for international forces or the Afghan government are "supporters of the infidels" and can be killed.

Also Wednesday, a presidential delegation sent to investigate civilian casualties in southern Afghanistan reported that 39 civilians were killed and four others were injured in fighting last month in Sangin district of Helmand province. According to a statement issued by President Hamid Karzai's office, the delegation stayed in Sangin for six days, interviewing local officials and relatives of the victims.

"They found out that the Taliban entered the houses of civilians and they fired toward a joint force of Afghan and coalition troops, who returned fire," the statement said. "President Karzai once again emphasized that civilian casualties are not acceptable."

Earlier, the Afghan government said 52 civilians died when a NATO rocket struck the village of Rigi, one of the most violent areas of the country.

That report was disputed by the international coalition. NATO said investigators determined that alliance and Afghan troops came under attack about 6 miles south of the village and responded with helicopter-borne strikes. Coalition forces reported six insurgents killed, including a Taliban commander.

At least 2,412 Afghan civilians were killed in fighting last year - up 14 percent from 2008, according to the United Nations. The U.N. found that about two-thirds of the civilian deaths were a result of actions initiated by the insurgents, while the percentage of civilian deaths attributed to NATO and Afghan government forces had dropped.

In the days since the release of their code of conduct, insurgents have killed 43 Afghan civilians - most in bomb explosions, NATO said.

On Thursday, NATO forces said a Canadian helicopter went down in southern Afghanistan but no one was injured.

The craft went down Thursday afternoon in Kandahar province's Panjwai District, a volatile area under the command of Canadian forces. NATO forces spokesman Maj. Michael Johnson says the craft made a "hard landing" and then caught fire.

Taliban spokesman Qari Yousef Ahmadi claimed the insurgent group shot the craft down with a rocket. Johnson said the cause of the incident is being investigated and hostile fire has not been ruled out.

A shopkeeper said he heard a loud bang, then saw smoke and the helicopter falling into a field.

Johnson said the five crew members and five passengers have been recovered safely.