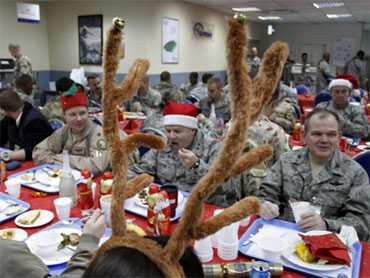 MARJAH, Afghanistan - The top U.S. and NATO commander in Afghanistan crisscrossed the country on Saturday, visiting coalition troops on Christmas at some of the main battle fronts in a show of appreciation and support in the tenth year of the war against the Taliban.

Gen. David Petraeus started his Christmas visit by traveling in a C-130 cargo plane from the capital, Kabul, to the northern province of Kunduz, telling troops with the U.S. Army's 1-87, 10th Mountain Division that on this day, there was "no place that (he) would rather be than here" where the "focus of our effort" was.

The northern part of the country has seen increased fighting, with the Taliban stepping up their attacks as NATO focuses its sights on the militant movement's southern strongholds. Petraeus was briefed on the situation in the region by German Maj. Gen. Hans-Werner Fritz, the commander of NATO's northern regional command.

Petraeus handed out commemorative coins to troops who had served for 3 or more years since the Sept. 11, 2001 attacks, and awarded several medals, including three purple hearts. He then went by helicopter over desert mountain peaks to the western province of Farah, where the Italian army's 7th Alpini is stationed.

The U.S. general's visit coincided with one by Gen. Vincenzo Camporini, the Italian chief of defense general staff. Petraeus congratulated the Italian soldiers on the "progress that has been achieved in the first few months that this unit has been here."

Petraeus's next stop was the Taliban stronghold of Marjah in Helmand province, scene of some of the heaviest fighting recently between the Taliban and NATO-Afghan forces.

He spoke to the Marines on the base, praising them for the improvements in the area, which was once a Taliban stronghold and still sees Taliban attacks.

"You are part of America's new greatest generation. It is not just the courage that you have shown, it is not just the skills that you have shown in arms, although you have had to do that on a near daily basis in tough areas like this," he told the men and women of the 2nd Battalion, 6th Marine Unit. "It is the versatility that you demonstrate going outside the wire every day, being ready for a hand grenade or a handshake and knowing what to do if either of those comes your way."

Petraeus said the unanimity achieved at a November NATO summit in Lisbon, where member states committed to Afghanistan until 2014, came about partly "because of the progress that was achieved literally in the months leading up to that summit."

If the situation Marjah had been the same as earlier in the year, Petraeus said, that unanimity would not have been there.

Marjah has become a symbol of the problems facing NATO troops in Afghanistan. More than 7,000 U.S.-led NATO ground troops launched a nighttime invasion of the region of farming hamlets last February to rout insurgents and cut off their income from the drug trade. NATO officials said the effort would pave the way for the Afghan government to move in aid and start delivering public services.

Marine Maj. Gen. Richard Mills on Dec. 7 declared that the battle in Marjah was "essentially over." But the campaign took longer than NATO officials had hoped, and illustrated the complexity of trying to wrest control of an area where Taliban influence remained strong.

Efforts to create a civilian government in Marjah have been painfully slow, and U.S. troops struggled against roadside bombs and sniper attacks from an enemy that could blend in with the local population.

Petraeus said "we probably created expectations that were unduly high, and we worked through that."

He said that when the campaign in Marjah began, it was "a headquarters for the Taliban," a bomb-making center and location for the illegal narcotics industry.

"Now of course it is flourishing," he said. Where once there was no school, there are now 1,200 attending classes.

It is not known when U.S. troops could be withdrawn in significant numbers from Helmand as heavy fighting continues elsewhere in the area, including the Sangin district where Marines took over from British forces.