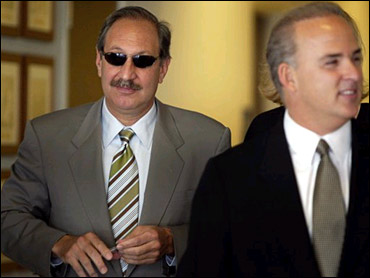 Scott Peterson's murder trial veered Wednesday from whether he killed his pregnant wife to whether charges should be dropped because a detective allegedly lied on the stand.

At issue was testimony from Modesto police Detective Allen Brocchini, the man who first led the investigation into the disappearance of Laci Peterson.

Judge Alfred A. Delucchi had planned a closed-door discussion of a defense request to declare a mistrial or dismiss the charges outright. But appeals from lawyers representing news organizations resulted in a public debate. During the exchange, Delucchi indicated that defense lawyer Mark Geragos claims Brocchini fabricated testimony to support the prosecution's case.

Jurors were not present for the exchange.

Delucchi has rejected two mistrial requests from Geragos during the trial's seven weeks. Legal experts said a mistrial or dismissal is highly unlikely in the latest instance.

Geragos has claimed authorities were determined to get a high-profile conviction at any cost. His latest example - and potentially the most harmful to prosecutors - is Brocchini's testimony about a tip he received several days after the remains of Laci Peterson and the couple's fetus washed onto a San Francisco Bay shore.

The tipster alleged that, in 1995, Scott Peterson mentioned that he would dispose of a body by sinking it in the ocean. Brocchini testified last month he didn't consider the information credible and shelved it.

He also said the tipster alleged Peterson said he would "tie a bag around the neck with duct tape" - a potentially damaging assertion because police said duct tape was found on Laci Peterson's badly decomposed torso.

A source who has heard a tape of Brocchini's interview with the tipster told The Associated Press that the man never mentioned duct tape, implying Brocchini lied on the stand.

Prosecutors allege Peterson murdered his wife in their Modesto home on or around Dec. 24, 2002, then dumped the weighted-down body in the bay. Police arrested Peterson after the remains were found in April 2003 near where he claims to have gone fishing alone that Christmas Eve morning.

On Wednesday, Geragos called Brocchini's testimony an "intentional and willful violation." He has argued that Peterson was framed by someone who knew his widely reported alibi.

The judge deferred a decision on what to do about Brocchini's testimony until July 29. Delucchi has been inclined to discuss such motions in private, but indicated Wednesday the hearing would be open if lawyers could argue their positions without revealing information that could taint jurors who might - improperly - be following the case in the press.

Geragos wants to discredit Brocchini even more by trotting out a 1998 home invasion robbery case in Modesto which Brocchini investigated.

Brocchini's testimony caused a mistrial after a Stanislaus County judge ruled his comments might have prejudiced the jury, according to court documents. Despite the judge's admonitions, Brocchini told jurors he wanted to talk with one defendant about another robbery in which "he may or may not have been involved."