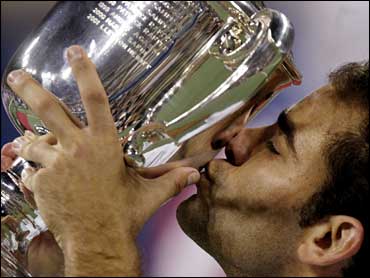 Pete Sampras says most of his trophies and other memorabilia have been stolen from a West Los Angeles public storage facility.

The Los Angeles Times reported Tuesday that Sampras only lost one of his 14 Grand Slam trophies, for his first Australian Open win.

But thieves took most of the prizes from his 64 tour title wins, two Davis Cups, an Olympic ring and six trophies for finishing world No. 1 in the year-end rankings from 1993 to 1998.

The theft happened three weeks ago. Sampras says he's getting the word out in hopes somebody offers a lead.

Sampras retired in 2003 and said the loss is most upsetting because he would have liked to have shown the trophies to his children.

He says the loss "is like having the history of my tennis life taken away."