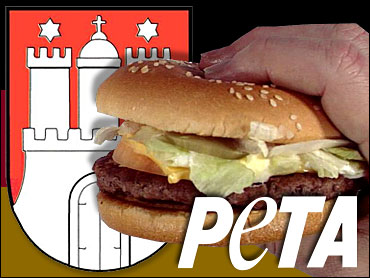 "The town's name conjures up visions of unhealthy patties of ground-up dead cows," said Joe Haptas, spokesman of People for the Ethical Treatment of Animals (PETA), in a letter faxed Monday to Hamburg Supervisor Patrick Hoak.

PETA offered to supply area schools with $15,000 worth of non-meat patties for the name change.

"Our offer is serious as a heart attack," Haptas said.

"With all due respect, I think it's a delicacy in our community," he said about hamburgers. "We're proud of our name and proud of our heritage."

The Buffalo suburb, named Hamburg since 1812, claims to be the birth place of the American culinary staple. Hamburg commemorates the birth of hamburgers at its annual Burgerfest.

In 1996, PETA proposed that the Hudson Valley town of Fishkill change its centuries-old name to Fishsave, since the group believed the name conjured up violent imagery of dead fish.

The town was named by Dutch settlers in the early 1600s. "Kill" is the Dutch word for "stream."