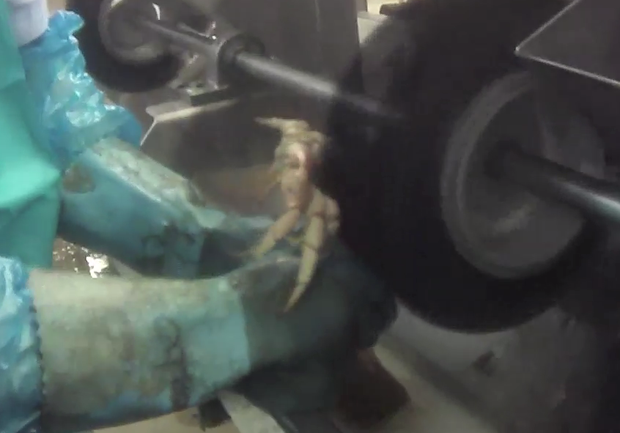 A top seafood plant in Maine is killing lobsters and crabs using a "primitive and painful" method that violates the state's cruelty-to-animals statute, according to an animal rights group that shot video of the alleged abuse.

People for the Ethical Treatment of Animals provided CBSNews.com with the video, which the group says was shot by one of its investigators at Linda Bean's Maine Lobster in Rockland. The footage, part of a five-month PETA investigation, appears to show workers ripping apart the bodies of conscious lobsters, slamming live crabs face-first onto spikes and forcing their exposed organs against spinning bristles.

"These animals are dying agonizing deaths at this facility," said Dan Paden, an evidence analysis manager at PETA.

The animal rights group says the company should be using readily available technology that electrically stuns the animals or subjects them to hydrostatic pressure before they're dismembered. Both methods kill the crustaceans almost instantaneously.

PETA says Ms. Bean has denied requests to meet with them about the alleged abuse. Ms. Bean did not immediately respond to a request for comment from CBSNews.com.

PETA said it would file a criminal complaint Tuesday with local police and the district attorney. Maine law criminalizes intentionally killing animals by any method that does not cause instantaneous death. The statute does not specifically exempt lobsters and crabs.

Scientists and industry experts have long debated whether crustaceans - invertebrates that have simple nervous systems and far fewer neurons than vertebrates - are immune to pain. With very few exceptions worldwide, lobsters and crabs are not protected by animal welfare laws because of a long-held belief that the creatures cannot experience pain.

When lobsters thrash around after being placed in a pot of boiling water, do they suffer?

A study conducted by the University of Oslo said probably not, claiming that "lobsters and crabs have some capacity of learning, but it is unlikely that they can feel pain." In 2005, a panel of Norwegian scientists concluded that while lobsters and crabs have enough neurons in their body to react to threatening stimuli, there is no evidence they feel pain.

Robert Elwood, a researcher at Queen's University Belfast, studied the avoidance behavior of shore crabs by offering the animals two different shelters: one with an electric shock and one without. Elwood discovered that crabs that were shocked the second time the experiment was run were far more likely to choose the other shelter in the next trial. Crabs in the safe haven stayed put.

Elwood, who reviewed the video recorded by PETA, said the crab behavior depicted in the footage was "consistent with that of an animal feeling pain."

Dr. Bjorn Roth, a scientist at the Norwegian Institute of Food, Fishery and Aquaculture, also viewed the video of the Maine plant's killing method.

"This is carving the animal alive and would no doubt cause unnecessary pain," Roth said.

PETA says that Linda Bean's Maine Lobster should be using a Crustastun - a gadget that bills itself as the "world's most compassionate stunning system for crabs and lobsters." The device essentially destroys the animals' nerve centers and kills them in seconds.

"There's no excuse for the blatant and, we would argue illegal, cruelty going on at this slaughterhouse when there are alternate slaughter methods that rapidly stun and kill these animals," Paden said.

The lobster industry is big business in Maine, which processed a record 127 million pounds last year. Statistics released by the state's Department of Marine Resources show that fishermen reeled in more than $300 million from that statewide catch in 2012. And according to The Associated Press, the annual marketing budget for lobsters in Maine will increase more than six-fold under a law taking effect in October.

In a profile earlier this year, the Bangor Daily News called Bean, the granddaughter of L.L. Bean's founder, "one of the major players in the state's lobster industry" and reported that she expects her five buying stations to purchase 7 million pounds of seafood in 2013.