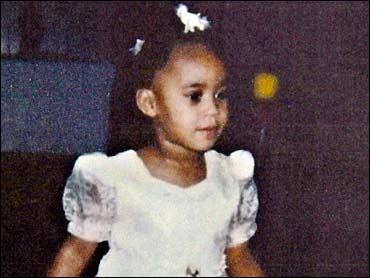 Among the flowers and balloons at the memorial to the girl long known in Kansas City as Precious Doe, a handwritten sign announced the news: My name is Erica Michelle Marie Green.

The child's identification came with word that her mother and her mother's husband had been arrested and charged with the grisly 2001 murder and that the sad story started when the little girl simply refused to go to bed.

"We're used to homicides and that's a sad commentary in itself," said community activist Alonzo Washington on CBS News' The Early Show Friday. "However, when you find a child decapitated and you throw away the head and the body like it's garbage, I wanted to create memorials, do vigils to make everybody in this city always remember that something this horrible has happened and to always search for justice."

The break in the case apparently came from an advertisement Washington placed in a local paper.

A man who had previously been in contact with police came forward again, talking with detectives and Washington last weekend.

Washington said the source — the stepfather's grandfather — then sent photographs of the child as well as hair samples from both the child and the mother, which were used for a DNA match.

Washington told Early Show co-anchor Hannah Storm he almost didn't place that ad, because his efforts were being ridiculed.

"They were saying, you know, 'Alonzo is obsessed. The community leaders are losing their heads.' Things such as that, and I had to remember to press on," Washington said. "We needed justice for this child."

"This is a real testament to law enforcement and the community working together to make sure she have these two people in custody and we'll be seeing them in court here fairly soon," said Sanders, also on The Early Show, adding that the couple would be extradited to Kansas City as soon as possible.

The little girl was kicked and left to die, her head then crudely cut from her body with a pair of hedge clippers. And for four years, she went without even a name.

"There is nothing which could ever justify that," Jackson County Prosecutor Michael Sanders said of Erica's death.

Michelle M. Johnson, 30, and her husband, Harrell L. Johnson, 25, both of Muskogee, Okla., were charged with endangering the welfare of a child and second-degree murder of the woman's daughter. The Johnsons were not married at the time of the girl's death, but prosecutors have referred to Harrell Johnson as the girl's stepfather.

Johnson had already been jailed in Muskogee on unrelated charges; his wife was taken into custody. Both were awaiting extradition to Kansas City.

A tip last weekend led police to the Johnsons. Authorities said their interrogation of the two unrolled this story, detailed in a probable cause statement filed in Jackson County Circuit Court:

One night in April 2001, high on PCP and under the influence of alcohol, Harrell Johnson became angry when Erica, a few weeks shy of her fourth birthday, ignored orders to go to bed.

This much the Johnsons agree on: the girl fell unconscious but they declined to seek treatment, fearful because of the outstanding warrants for their arrests.

Police say the girl lingered for a day or two and after she died, the parents carried the body down the street, then through the woods, where the Harrell Johnson cut the girl's head off with hedge clippers.

The body was found April 28, 2001. Days later, her head was found nearby, wrapped in a trash bag.

After the decapitated body was found, police knocked on doors in the neighborhood, even at the house where the Johnsons were staying, according to police records obtained by The Kansas City Star. The records show Michelle Johnson answered the door and told an officer that a suspicious black male had been wandering the neighborhood the previous night.

In the months following, hundreds volunteered to answer witness hot lines and pass out fliers with an artist's rendering of the girl; hundreds more prayed and sang at candlelight vigils. More than 1,000 leads poured in to authorities and the case never totally left locals' consciousness as the years have passed.

Oklahoma records show that Michelle Johnson has convictions for theft and forgery. Harrell Johnson, being held at a Muskogee jail on unrelated charges, has convictions for several offenses, including assault with a dangerous weapon and possessing a sawed-off shotgun.

Authorities said the Johnsons had been staying with friends or family in Kansas City at the time of Erica's death and had only been here for a short time. Police closed off the street Thursday and stood outside the run-down home where the killing allegedly took place.

Locals who long had been transfixed by the case heralded news of the arrests. They trickled in to the small park that is home to the permanent memorial to Precious Doe, where just last weekend dozens turned out to pray for the child to be identified.

Some left balloons and teddy bears, others flowers and toys. One note left for Erica at the memorial came from a child: "You have a name now and your spirit is set free."