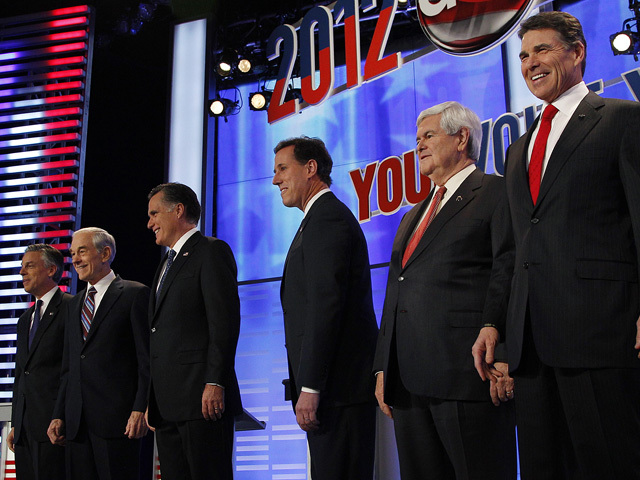 Rick Perry said he would send U.S. troops back to Iraq at a Republican presidential debate in New Hampshire on Saturday.

"The idea that we allow the Iranians to come back into Iraq and take over that country, with all of the treasures, both in blood and money, that we have spent in Iraq- because this president wants to kowtow to his liberal leftist base, and move out those men and women. He could have renegotiated that time frame. I think it is a huge error for us," Perry said at the debate, sponsored by ABC News/Yahoo!/WMUR-TV.

This is the not the first time that the Texas governor has been critical of President Obama's foreign policy in Iraq, but it is the first that he has suggested sending troops back after their withdrawal last month.

At a campaign stop in Iowa in December, Perry said on Iraq, "Giving your enemy is a timeline of which you're going to withdraw is really bad tactics."

Perry was bolder at the ABC News/Yahoo GOP presidential debate Saturday, citing Iran as a potential problem in Iraq.

"We're going to see Iran, in my opinion, move back in at literally the speed of light. They're going to move back in, and all of the work we've done -- every young man that has lost his life in that country will have been for nothing. Because we've got a president that does not understand what's going on in that region," Perry said.

After a disappointing fifth place finish in the Iowa caucuses Tuesday, Perry hinted he might end his campaign, but said the next day he would remain in the race. Perry has essentially written off New Hampshire, which holds the first in the nation primary Tuesday, and is instead focusing on the January 21 primary in South Carolina, where voters are more likely to be receptive to his social conservative message.

Still, Perry faces a tough road forward and after a surging in the polls several months ago, Perry has steadily declined.

His argument for sending troops back to Iraq may not help. In a recent CBS News poll, three out of four American supported Mr. Obama's decision to withdraw U.S. troops from Iraq.