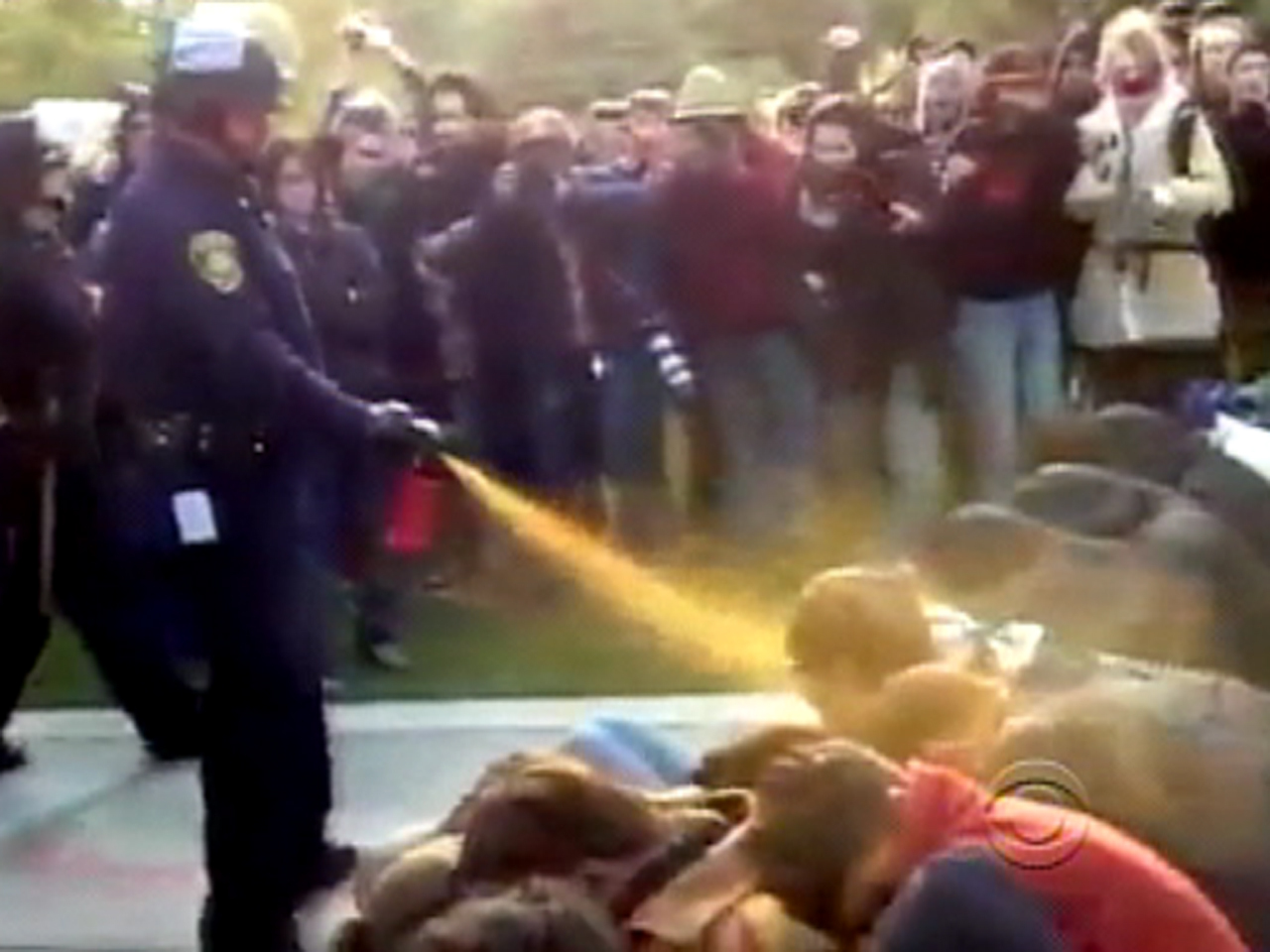 "Works great on social beggars or anyone else you want to keep in their place. Perfect for use on prep school scholarship students!" read one of several dozen Amazon reviews of pepper spray - many of which offered tongue-in-tongue commentary in the aftermath of the pepper spraying of students by a UC Davis police officer last week.

But wisecracks notwithstanding, the effects of pepper spray on humans are anything but pleasant. As a 2004 paper written by researchers at the University of North Carolina and Duke University noted, this popular crowd control tool also is a potent inflammatory agent that can trigger myriad physical reactions ranging from the disabling to the deadly.

Particular brands contain individual mixtures of water, alcohols, and organic solvents and other compounds and their inhalation has been linked as a contributory factor in subsequent cardiac and respiratory, problems, including arrhythmias and sudden death.

That last point may surprise the general reader but as Scientific American pointed out, the potentially lethal effects of pepper spray have been widely documented. For instance, in the 1990s, the Justice Department listed nearly 70 deaths it said were linked to the use of pepper-spray. A few years later, the ACLU pressed California's Supreme Court to classify pepper-spray as dangerous and cruel, likening it to "a kind of chemical cattle prod on nonviolent demonstrators resisting arrest." The organization further claimed that its use "constitutes excessive force and violates the Constitution."

Pepper spray, which first arrived in the U.S. from Canada, where it was originally developed in bear repellant, saw its initial use by letter carriers looking for ways to keep overzealous watchdogs at bay. It began gaining ground on an ad hoc basis with law enforcement agencies in the 1980s. By 1992, it was legalized for police use.

The active agent in pepper spray belongs to a family of chemicals found commonly in pepper plants. In the body, these chemicals control a a brain-signaling compound called Substance P, that modulates pain recognition and sensitivity to heat. When there are high levels of this active ingredient, called capsaicin, it can lead to the secretion of too much Substance P. So it happens that the discomfort caused by pepper spray is connected to how much Substance P makes its way to the brain and spinal cord.

"As a result of this chemical action, when a person is pepper sprayed, immediate, excruciatingly painful symptoms occur in the eyes, bronchial passages and other respiratory organs," according to a 1995 ACLU report. "Breathing becomes almost impossible and the eyes are forced closed."

"Respiratory responses to OC spray include burning of the throat, wheezing, dry cough, shortness of breath, gagging, gasping, inability to breathe or speak (due to laryngospasm or laryngeal paralysis), and, rarely, cyanosis, apnea, and respiratory arrest. Nasal application of capsaicin causes sneezing, irritation, and reflex mucus secretion. Its inhalation can cause acute hypertension (similar to ammonia inhalation), which in turn can cause headache and increase the risk of stroke or heart attack."

For those who have never experienced the effects of pepper spray, here's one way to imagine the sensation: A century-old scale developed to rate pepper pungency. The hottest naturally grown pepper comes out between 855,000 and 1,050,000 so-called Scoville units. In comparison, standard U.S. grade pepper spray, ranged from 2 million Scoville units for the kind that civilians are able to buy legally and 5.3 million units for the sort of spray used on the U.C. protesters.