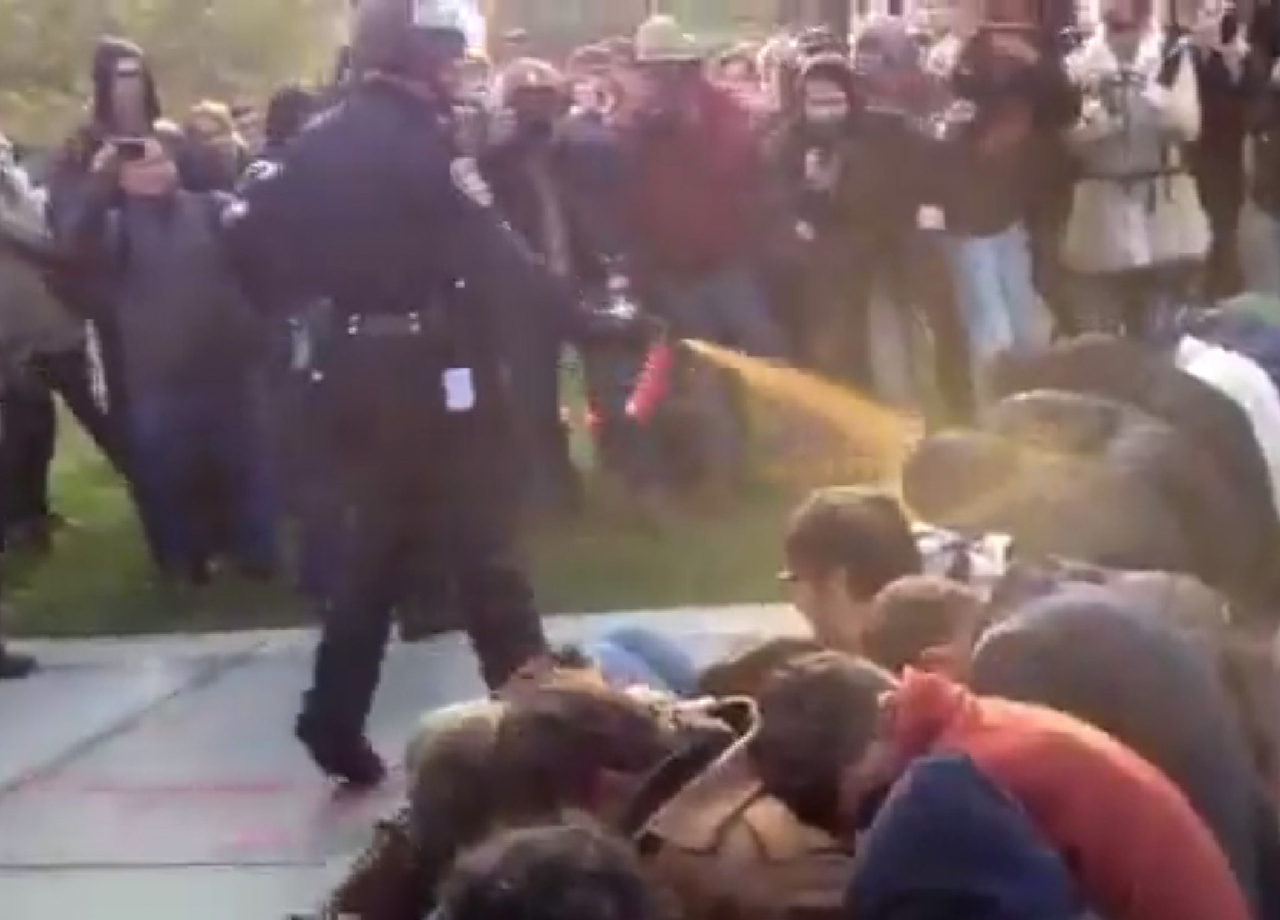 SAN FRANCISCO - As video spread of an officer in riot gear blasting pepper spray into the faces of seated protesters at a northern California university, outrage came quickly — followed almost as quickly by defense from police and calls for the chancellor's resignation.

University of California Davis Chancellor Linda Katehi said in a statement Saturday she was forming a task force to investigate the police action and the video images she said were "chilling."

However, a law enforcement official who watched the clip called the use of force "fairly standard police procedure."

In the video, an officer dispassionately pepper-sprays a line of several sitting protesters who flinch and cover their faces but remain passive with their arms interlocked as onlookers shriek and scream out for the officer to stop.

As the images were circulated widely on YouTube, Facebook and Twitter on Saturday, the university's faculty association called on Katehi to resign, saying in a letter there had been a "gross failure of leadership."

At a news conference, Katehi said what the video shows is, "sad and really very inappropriate" but defended her leadership and said she had no plans to resign.

"I do not think that I have violated the policies of the institution," she said. "I have worked personally very hard to make this campus a safe campus for all."

Katehi remained in a media room for more than two hours after the news conference, eventually walking to an SUV past a group of students nearly three blocks long who, in a coordinated effort, remained completely silent. The Sacramento Bee said.

The protest was held in support of the overall Occupy Wall Street movement and in solidarity with protesters at the University of California, Berkeley who were jabbed by police with batons on Nov. 9.

Charles J. Kelly, a former Baltimore Police Department lieutenant who wrote the department's use of force guidelines, said pepper spray is a "compliance tool" that can be used on subjects who do not resist, and is preferable to simply lifting protesters.

"When you start picking up human bodies, you risk hurting them," Kelly said. "Bodies don't have handles on them."

After reviewing the video, Kelly said he observed at least two cases of "active resistance" from protesters. In one instance, a woman pulls her arm back from an officer. In the second instance, a protester curls into a ball. Each of those actions could have warranted more force, including baton strikes and pressure-point techniques.

Images of police actions have served to galvanize support during the Occupy Wall Street movement, from the clash between protesters and police in Oakland last month that left an Iraq War veteran with serious injuries to more recent skirmishes in New York City, San Diego, Denver and Portland, Ore.

Some of the most notorious instances went viral online, including the use of pepper spray on an 84-year-old activist in Seattle and a group of women in New York. Seattle's mayor apologized to the activist, and the New York Police Department official shown using pepper spray on the group of women lost 10 vacation days after an internal review.

In the video of the UC Davis protest, the officer, a member of the university police force, displays a bottle before spraying its contents on the seated protesters in a sweeping motion while walking back and forth. Most of the protesters have their heads down, but several were hit directly in the face.

Some members of a crowd gathered at the scene scream and cry out. The crowd then chants, "Shame on You," as the protesters on the ground are led away. The officers retreat minutes later with helmets on and batons drawn.

Nine students hit by pepper spray were treated at the scene, two were taken to hospitals and later released, university officials said.

They declined to release the officer's name.

UC Davis Police Chief Annette Spicuzza said the decision to use pepper spray was made at the scene.

"The students had encircled the officers," she said Saturday. "They needed to exit. They were looking to leave but were unable to get out."

Officer Albie Esparza says police and city crews took down about 12 tents. The six were arrested on charges of interfering with officers.

The raid came several hours after police and public works crews removed dozens of tents from the nearby Occupy camp at Justin Herman Plaza.

Earlier, several hundred protesters in Oakland tore down a chain-link fence surrounding a city-owned vacant lot and set up a new encampment five days after their main camp near City Hall was torn down.

"They obviously don't want us at the plaza downtown. We might as well make this space useful," Chris Skantz, 23, told the San Francisco Chronicle.

The Occupy Oakland protesters breached the fence and poured into the lot next to the Fox Theater on Telegraph Avenue, police said in a statement.

The protesters passed a line of police surrounding the lot without a struggle, used wire cutters to take down the fence and pulled down "no trespassing" signs the Chronicle reported.

Watson said there had been no arrests or citations, but the city's position remains that no camping will be allowed and protesters can't stay overnight.