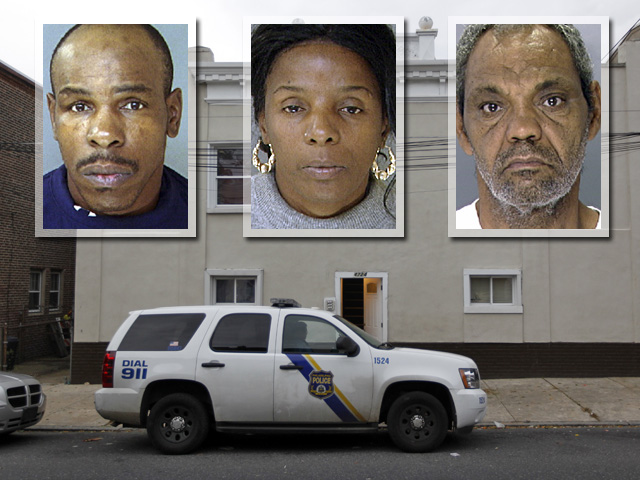 PHILADELPHIA - The landlord of the apartment building at first thought a circuit breaker had tripped when he went to the basement Saturday and found all the lights were out. Then he realized all six bulbs had been removed, and he heard dogs barking inside a boiler room, its door chained shut.

He removed the chain, stepped into the dank, foul-smelling room and lifted a pile of blankets. Several sets of human eyes stared back at him.

Turgut Gozleveli had stumbled upon four mentally disabled adults, all weak and malnourished, and one chained to the boiler.

He may have also stumbled upon a vast scheme — stretching from Philadelphia to Norfolk, Virginia; West Palm Beach, Florida, and Texas — to steal the monthly Social Security disability checks of defenseless and vulnerable people, authorities said.

Philadelphia police on Saturday arrested three adults staying in an apartment upstairs, including the person accused of being the ringleader, Linda Ann Weston, who had been convicted of murder in a 1981 starvation death.

Detectives also found dozens of identity cards, power-of-attorney forms and other documents in the apartment, suggesting the theft scheme involved more than just the four captives.

"Without a doubt. This is just the beginning of this investigation," Lt. Ray Evers said Monday. "We think she's been doing this for quite some time."

How long, how much money the scheme brought in, how the disabled were deceived and how many people in all were victimized are still unclear, investigators said. The FBI has joined the investigation.

Weston, 51, was charged with kidnapping, false imprisonment and other offenses, with bail set at $2.5 million. Also arrested and jailed were the man she described as her boyfriend, 50-year-old Eddie "the Reverend Ed" Wright, and 47-year-old Gregory Thomas.

"Talk about preying on the weak and weary," Evers said. "You can't get any lower than this person."

As of Monday, the defendants did not appear to have lawyers. They couldn't be reached for contact in jail.

The victims, a woman and three men, were found in a crawlspace that reeked of urine and was too shallow for an adult to stand up. There were mattresses and blankets, but the only food found was a container of orange juice. The adults shared their space with three dogs.

Gozleveli called police, suspecting they were squatters, then watched as officers and ambulance workers helped them up the steps to the street in a working-class section of the city's Tacony neighborhood.

The victims, ages 29 to 41, had the mental capacity of 10-year-olds, along with some physical disabilities, authorities said. One could barely see.

Three of them — Tamara Breeden, Derwin McLemire and Herbert Knowles — told KYW-TV on Monday that they were mistreated by Weston, Wright and Thomas.

Breeden, 29, told the TV station that she was hit on her head and showed where she said some of her teeth were knocked out.

McLemire, 41, said he met Weston through an online dating service and tried to escape but didn't get away "so they got me."

Knowles, 40, was shackled to the boiler and said he was hit by one of the two men arrested with Weston.

Neighbors said the defendants and the basement captives had arrived in an SUV from West Palm Beach, Florida, about two weeks ago, though it does not appear the victims spent the entire time in the basement.

Danyell "Nicky" Tisdale, a neighborhood resident, said that about a week ago a man and a woman and four mentally disabled adults held a yard sale, selling piles of shoes, jackets and other clothing on the sidewalk.

Since the arrests, police have slowly and patiently been trying to elicit information from the captives. All four were treated at hospitals and placed with social service agencies.

Breeden had been reported missing by her family in Philadelphia in 2005, police said. One of the men also is from Philadelphia, and a second, McLemire, is from North Carolina. Their relatives were contacted. Police were having trouble finding family members for Knowles.

According to an investigative report obtained by The Associated Press, Knowles was reported missing in Norfolk, Virginia, in December 2008 after a mental health case worker couldn't reach him and family members failed to hear from him. The report described him as "slightly mentally retarded."

The case worker reported that Knowles' Social Security checks were going to a Philadelphia address. The report said Philadelphia police went by the address and were told no one there had ever heard of Knowles.

Knowles' government benefits were stopped after his mail was forwarded to Philadelphia, but Weston took him to a Philadelphia social service agency in 2008 and showed identification, and the checks resumed, Norfolk police said.

Norfolk police spokesman Chris Amos said police did not continue looking for Knowles because as an adult he was under no obligation to report to his case worker.

"It's not illegal to be missing," Amos said. "A lot of people are missing by choice."

Scam artists can get control of a disabled person's checks by visiting the Social Security office with the victim, who then designates the other person to receive the payments, said Nora J. Baladerian, a clinical psychologist in Los Angeles and advocate for people with disabilities.

Only if there is a report of suspected abuse would social service agencies enter the picture, she said.

In Florida, Weston and Thomas appeared to live with several disabled adults, including a man and woman who had bruises on their faces, neighbors in a poor section of West Palm Beach said. The woman also had what looked like a large burn mark on her face, neighbor Ronald Bass said.

He said that he often heard yelling, apparently from the disabled women, and that police frequently went to the house.

Another neighbor, Sadie Pollard, said she saw bruised lips and other facial injuries on the disabled people but was told they had been fighting with each other.

Weston was convicted of murder and voluntary manslaughter in the death of her sister's boyfriend. According to news accounts, Weston and her sister beat him and locked him in a closet because he refused to support the unborn child he had fathered. He died of starvation weeks later.

It was unclear from court records whether Weston served any prison time.

Gozleveli, the landlord who discovered the victims, freed the man chained to the boiler.

"He was just watching me when I cut the chain," Gozleveli said. "I asked them what they are doing here and how they got in. There was no communication. I asked questions, and I don't get any answers."

Philadelphia police Commissioner Charles Ramsey said: "This case is going to be going on for a while. We don't know how far it will extend."