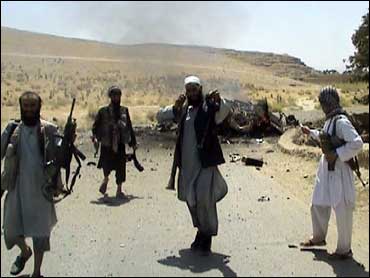 U.S. troops have beaten a tactical retreat in Afghanistan, abandoning the remote border outpost that was almost overrun by insurgents over the weekend. And Defense Secretary Robert Gates is scrambling to find reinforcements he can send - right away, CBS News national security correspondent David Martin reports.

"Do you intend to send more forces in the near term to Afghanistan?" Martin asked at a press conference.

"We are clearly working very hard to see if there are opportunities to send additional forces sooner rather than later," Gates told CBS News.

The largest unit immediately available is a force of 2,200 Marines and their helicopters in the Persian Gulf. But they are on standby for Iraq.

Another pressing need is for overhead reconnaissance aircraft that can detect fighters moving into Afghanistan from their safe-havens in Pakistan.

"The border there is a really critical issue that we're going to have to solve - and it has to be solved sooner rather than later," Mullen said.

The Army identified the nine soldiers killed in the weekend border attack, overwhelmed by insurgents, who are believed to have come across that border.

Gates bluntly criticized the Pakistan government for failing to do much about it.

"There is no question that the absence of pressure on the Pakistani side of the border and is creating an opportunity for more people to cross the border and to launch attacks," Gates said.

U.S. forces in Afghanistan currently operate under so-called "hot pursuit" rules, which allow them to bomb or shell insurgents firing at them from across the border.

But now the U.S. military is working on plans to cross the border, not just in hot pursuit, but to clear out the safe havens in Pakistan.