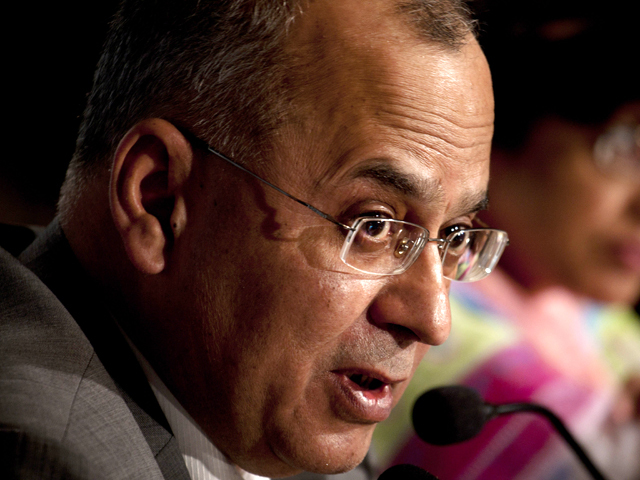 WASHINGTON - The U.S. has no "definitive evidence" that Pakistan knew Osama bin Laden had been living in the compound where Navy SEALs killed him, but the Pakistanis must now show convincingly their commitment to defeating the al Qaeda terrorist network, a senior Pentagon official said Thursday.

Michele Flournoy, the top policy aide to Defense Secretary Robert Gates, told reporters that the Pakistani government should, for example, help the U.S. exploit the materials the SEALs collected inside bin Laden's lair during their raid on Monday.

Flournoy was the first Pentagon official to comment on-the-record about the raid. She offered no new details about it, but said it dealt "a very severe blow" to al Qaeda and offers incentive for Pakistan to cooperate more fully in defeating the terrorist network.

"This is a real moment of opportunity for us in terms of making further gains against al Qaeda," she said.

Questions about whether Pakistan knew of bin Laden's whereabouts, and may even have helped hide him, arose immediately after Monday's raid. Flournoy said U.S. officials have pressed Pakistan for more details about the matter.

Pressed for more detail about what evidence the U.S. might have about Pakistani knowledge of bin Laden's whereabouts prior to the raid, Flournoy declined to elaborate, saying that kind of information would have to come from the CIA, which led the hunt for bin Laden and oversaw Monday's raid.

In Islamabad, Pakistan's army on Thursday called for cuts in the number of American military personnel inside the country to protest the raid, and it threatened to cut cooperation with Washington if it stages more unilateral raids on its territory. A small number of U.S. soldiers have been training Pakistani forces in counter-insurgency operations.

Flournoy, the undersecretary of defense for policy, said she held previously scheduled talks at the Pentagon on Monday, just hours after the raid was announced, with a Pakistani government delegation. In that session and follow-up talks on Tuesday, Flournoy said she made clear that members of Congress — even those who have been supporters of increased cooperation with Pakistan — will be increasingly skeptical about the wisdom of continuing to provide billions of dollars in U.S. aid.

Pakistan must take "very concrete and visible steps to show their cooperation as a counterterrorism partner," she said, "because I do think that Congress will have to be convinced to sustain both civilian and military assistance to Pakistan." She added that the Obama administration still intends to keep close ties to Pakistan, even as it presses the Pakistanis for more information about bin Laden's presence in Abbottabad, the military garrison town a few dozen miles from Islamabad, the capital.

"My opposition to the program has only been heightened by the discovery of the most notorious terrorist in the world living hundreds of yards from a Pakistani military installation for more than five years. This reinforces my greater concern that the government may be incapable of distributing U.S. funds in a transparent manner that allows proper oversight of taxpayer dollars," Granger wrote.

Sen. Richard Lugar, R-Ind., a supporter of U.S. aid to Pakistan, said Thursday it would be self-defeating to walk away from the relationship.

"Distancing ourselves from Pakistan would be unwise and extremely dangerous," he told a Senate Foreign Relations Committee hearing. "It would weaken our intelligence gathering, limit our ability to prevent conflict between India and Pakistan, further complicate military operations in Afghanistan, end cooperation on finding terrorists, and eliminate engagement with Islamabad on the security of its nuclear weapons."

"It's not a time to back away from Pakistan," he said. "Frankly, I believe that our aid should continue to Pakistan."

Flournoy predicted that any doubts about bin Laden's death will be erased, even without the U.S. releasing a photo of his corpse.

"In time it will become apparent — undeniably apparent. I think al Qaeda will recognize that this is in fact the truth (and) and that they will make changes in their own leadership to reflect that truth," she said. "The same people who doubt whether he's dead today would probably look at a photo and doubt whether that's real."