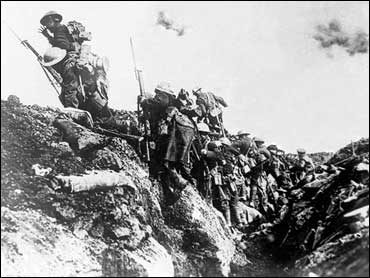 Eighty-eight years after he fell in battle near the Marne River east of Paris, the remains of U.S. Army Pvt. Francis Lupo have been recovered and identified by the U.S. Defense Department.

Lupo, from the midwestern city of Cincinnati, Ohio, was killed on July 21, 1918, during an attack on German forces near Soissons, France. His remains were discovered by a French archaeologist in 2003 and identified by scientists from the Pentagon's Joint POW-MIA Accounting Command and the Armed Forces DNA Identification Laboratory.

He is the first World War I casualty to be recovered and identified by the special command.

The Pentagon announced on Friday that Lupo will be buried on Tuesday at Arlington National Cemetery outside Washington, the nation's most revered military burial ground.

Lupo was 23 when he was killed in some of the fiercest, most gruesome fighting of the war. An anonymous extract from the diary of an officer in Lupo's unit described the artillery and aerial attacks in stark terms.

"Oh, how maddening are these horrible bloody sights! Can it be possible to reap such wholesale destruction and butchery in these few hours of conflict?" he wrote, according to an Army history of the war.

Larry Greer, a Pentagon spokesman on POW-MIA issues, said it was the first time the remains of a World War I service member have been recovered and identified since the Pentagon established an office in the 1960s with the specific mission of identifying war dead from abroad. He said available government records do not indicate when or whether World War I remains had been recovered and identified before the 1960s.

The Joint POW-MIA Accounting Command has recovered and identified hundreds of U.S. war dead from other conflicts, including World War II, the Korean War, the Vietnam War and Cold War-era aircraft shoot downs.

Lupo was a member of Company E, 18th Infantry Regiment, 1st Infantry Division when his unit fought as part of a combined French-American attack on German forces near Soissons in what came to be known as the Second Battle of the Marne. Some have called that battle a turning point in the war because it halted German advances toward Paris.

Of the 1st Infantry Division's 12,228 infantry officers and enlisted soldiers who fought in the Second Battle of the Marne, all but 3,923 were killed, wounded, taken prisoner or listed as missing, according to a Pentagon historical report. Lupo was reported missing in action, and no witness report or statement concerning the circumstances of his loss appears in the available records, the Pentagon report said.

A French archaeologist found skeletal remains, plus fragments of a military boot and a wallet bearing Lupo's name at the site of a conservation project near Ploisy in July 2003. Army historical records say Lupo's brigade was advancing toward Chaudun, about 1.5 miles southeast of Ploisy, as the 1st Infantry's four-day attack began.

Lupo's name was memorialized on the list of missing soldiers inscribed on the walls of the memorial chapel at the Aisne-Marne American Military Cemetery near the village of Belleau, not far from where he was killed.

Greer said Lupo's remains were one of two sets recovered at the same time at the same site. The other set of remains is believed to be an American soldier, but scientists have not yet identified them positively, Greer said.