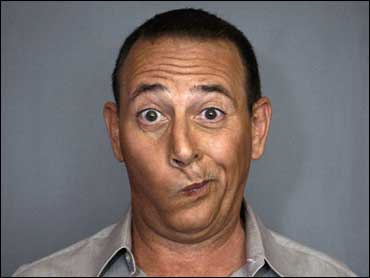 Reubens and his perennially adolescent alter ego Pee-Wee Herman vanished from public view a while back. Legal troubles, you'll recall.

But Pee-Wee re-emerged this month for the first time in 15 years, making a surprise appearance at Spike TV's Guys Choice Awards. Reubens began his latest resurgence last summer with a number of TV guest-star and film roles that have drawn kudos from critics.

"I feel like I'm on my third or fourth comeback, at least," says Reubens, whose close-cropped haircut and twinkling eyes belie his 54 years.

His comeback will continue with a dramatic role in Todd Solandz's upcoming film, set to begin shooting this fall, and a renewed effort to bring Pee-Wee back to the big screen.

"I didn't do everything I wanted to do as Pee-Wee Herman," he says of his lovable nerd who took television by storm with "Pee-Wee's Playhouse" in the early 1980s before moving on to hit films later in the decade.

On the TV show, Reubens created a colorful, psychedelic world populated by talking furniture and flowers. The quirky program appealed to artsy types of all ages, but Reubens says it was meant to inspire children.

"I was trying to do something about the golden rule and having good morals and being responsible, and then at the same time, being unique and exposing kids to art," he says.

He hopes to usher two of his Pee-Wee-centered screenplays into production soon. One follows the bow-tied protagonist and his old "Playhouse" pals on a road-trip adventure. The other, which Reubens describes as "the dark Pee-Wee movie," explores how Pee-Wee deals with Hollywood and the trappings of fame.

Reubens knows of what he writes, having experienced fame and infamy as both himself and his character. The actor's highly publicized arrest for indecent exposure in 1991 resulted in an oft-published mug shot — one of his first public photos as himself, not Pee-wee. The picture still surfaces from time to time, including a recent USA Today article about mug shots, but Reubens doesn't let it shake him.

"I'm in with Nick Nolte, James Brown ... Mel Gibson, Nicole Richie, Glen Campbell," he said. "I'm in great company. I can't change history and change the past, so what am I going to do? You just move on."

He took time off after the incident, but not because of it, he says. After writing, directing, producing and starring in his Saturday-morning kids' show for five years — plus making two movies — he was ready for a break. He was on vacation when he was arrested.

But his latest work shows he's clearly back to comedic form. Wearing Pee-Wee's shrunken gray suit and laughing his big laugh on the Spike awards stage "felt completely familiar and great," Reubens says. "It was like deja vu."

The character he brought to life on "30 Rock" is so odd and out-there, Reubens says, "it's like something I would have written." And he didn't even have to audition: Show creator Tina Fey wrote the part for him, he says.
2
It's that kind of outside confidence in his acting chops that will help Reubens branch out, both as Pee-Wee and away from him, says talent manager Lou Pitt.

"It's difficult to do, and it takes time to change people's perceptions," says Pitt, who doesn't represent Reubens. "For actors, they're really dependent upon the auspices of the directors and people who believe in a different side of (them)."

Arquette, a fellow comedian, actor and filmmaker, is one of the believers. He and Reubens became fast friends after meeting on the set of the 1992 movie "Buffy the Vampire Slayer." Arquette cast Reubens in his directorial debut, last fall's "The Tripper," and his wife, Courteney Cox, tapped him for a role in her show, "Dirt."

"In a way, I've become one of the Arquettes," Reubens says. "They're kind of keeping me working."

Arquette says his friend inspires him, calling Reubens "a national treasure that should be cultivated.

"Paul is one of the most creative, caring, thoughtful and imaginative people I've ever met," Arquette says. "He's got such an eye for art, an eye for film and story and comedy and it's such a unique look."

Reubens knew as a child that he wanted to be an actor. "I was a big TV freak as a real little kid," he says, always drawn to the theatrical and offbeat. He actively pursued his craft in middle school and went on to rule his high-school drama department. He continued his studies at Cal Arts, then with the Groundlings, where he developed Pee-Wee Herman.

Besides reviving Pee-Wee and taking on dramatic roles, Reubens wants to write and direct and play parts that seem "fun or interesting."

"I'm not even above just pure fun," he says. "It doesn't even have to be interesting."