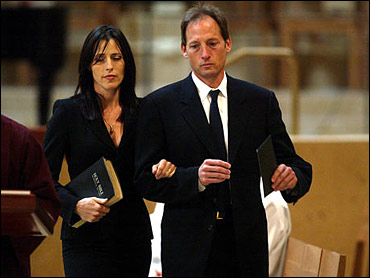 Gregory Peck was eulogized Monday as having possessed the virtues of Atticus Finch, the Academy Award-winning role he played in the movie "To Kill a Mockingbird."

The actor, who died last week at age 87, was laid to rest during a private service in the crypt-mausoleum beneath the Cathedral of Our Lady of the Angels before a public memorial.

"In art there is compassion, in compassion there is humanity, with humanity there is generosity and love," said Brock Peters, Peck's co-star in 1962's "Mockingbird." "Gregory Peck gave us these attributes in full measure. To this day the children of 'Mockingbird' ... call him Atticus."

"Gregory Peck did not have to act at being an extraordinary human being," Mahony said.

The mourners also watched a videotape in which Peck unwittingly provided his own eulogy during a lecture several years ago. Peck said he hoped to be remembered first as a good husband, father and grandfather.

"As a professional," he added, "I think I'd like to be thought of as a good storyteller. That's what's always interested me."

His comment was followed by brief scenes from his notable films, including "To Kill a Mockingbird," "The Keys of the Kingdom," "MacArthur" and "Moby Dick."

In "To Kill a Mockingbird," based on the novel by Harper Lee, Peck played widowed lawyer Atticus Finch, who is raising two children amid Southern racial unrest while defending a black man, played by Peters, who is wrongly accused of raping a white woman.