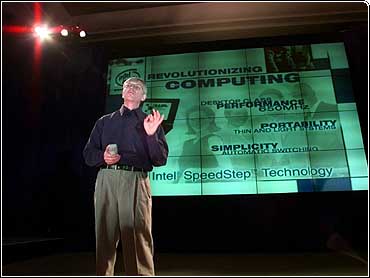 Feel the need for speed while on the go? Intel has come out with a new Pentium III computer chip for laptops that gives users the power of a desktop without sacrificing the battery life or convenience of a portable computer.

The world's largest maker of computer chips has unveiled its new Pentium III dual-mode SpeedStep processor. The chip allows a laptop to consume about half the battery power of a normal portable computer, while still being one of the fastest CPU's on the market today.

"Consumers really are highly tuned to (processor speeds) as a measure of greatness," says Robert Jecman, Intel's vice president of mobile computing. "We wanted to close the performance gap between desktops and mobile PCs. This packs the greatest performance that the industry has ever seen."

Since October, Intel has sharply closed the divide in power and performance of processors between desktops and laptops. Major advances are the introduction of the Pentium III chip and new manufacturing technology that allows them to squeeze 27 million transistors onto a wafer the size of a postage stamp.

The company has accelerated its rollout of speedy chips to try to ward off smaller competitors and increase the turnover rate for new corporate and consumer purchases.

Software companies typically design programs to match the speed of the faster chips available. Speeds are expected to approach 1 gigahertz by the end of this year, which will mean a lot of upgrades and new purchases.

After three years of development, SpeedStep technology comes at a time when many corporations are taking advantage of better screen resolution and higher processing speeds to switch from desktops to laptops.

Recent research predicts 85 percent of large businesses will buy laptops in the next year to increase productivity by enabling employees to take their work home or on the road.

Industry analyst Rob Enderle questions whether many consumers are willing to pay such a premium for the new chip, "People are looking at a number of things such as weight, ease-of-use, reliability and low cost, but not really high-end performance so much anymore."

He adds, "The market is not necessarily screaming for this right now, but it would be interesting if this technology could be applied at some future date to other mobile products."