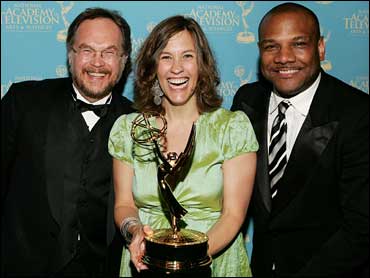 CBS' "The Price is Right" won Thursday night for game-audience participation show, where Barker served as executive producer until he retired last week at age 83.

Food Network star Paula Deen won for lifestyle host, while Eartha Kitt was honored as outstanding performer in an animated program for "Disney's The Emperor's New School" on the Disney Channel.

Four new categories for broadband, specifically computers, cell phones and other handheld devices, were created this year. The National Academy of Television Arts & Sciences teamed with the social networking Web site MySpace.com to solicit nominations from the public.

NBC's "The Office: Accountants" won in the comedy category; "It's Jerrytime!" on Ozone Inc. won in variety; "Cyberchase" on PBS won in children's; and "Satacracy 88" from Itsallinyourhands.com won for drama.

Among the major broadcast networks, ABC and CBS tied with seven, while NBC had five.

The awards were presented for the first time in a single ceremony that combined East and West coast winners at the Hollywood & Highland ballroom.

Other Daytime Emmys for performances and programs will be awarded Friday at Hollywood's Kodak Theatre during a two-hour telecast on CBS.

Winners are chosen by a panel of their peers in each category.