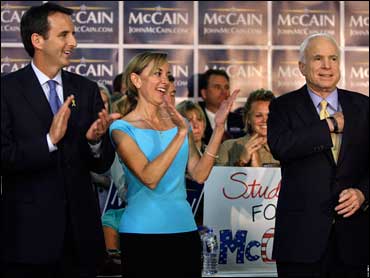 This column was written by Lisa Schiffren.

For John McCain, the conventional wisdom is that he needs a running mate with most of the following attributes: a conservative record; youth and vigor; sufficient experience to take over; economic expertise; solid domestic-policy experience; and some ineffable quality that will add "sizzle" to such a known quantity. That's on top of general political talent, and maybe a swing state to bring over. The thing to avoid most assiduously is a ticket that looks like the too-familiar, traditional White Male Wasp pairing, that will look old and tired next to the exciting color and newness of Barack Obama's ticket.

In reality, of course, the unfortunate fact about a vice-presidential pick is that a bad one can hurt you, and a good - even great - one won't help much. Looking at the more frequently mentioned politicians that John McCain is said to be considering, it is clear that there is no really dazzling choice. The danger he faces is failing to discern which otherwise neutral qualities would be deal breakers this year. The wrong flaws could detract measurably from the ticket.

Mitt Romney, the object of this week's buzz, looks great on paper (and in person). He is well versed in economics and business, which is McCain's most serious lack. Romney is youngish, vigorous, and articulate. He is smart and an accomplished technocrat. He was a governor. He has been vetted by the national media in his own campaign, and he doesn't need lengthy introductions. Should be open and shut. But Romney is a disaster waiting to happen.

Consider that it wasn't only the media that vetted Romney during his interminable primary campaign. GOP voters took a good look and said no thanks, despite the record amounts of his own money that Romney spent, per vote. Mitt was still on the shelf when he hit his "sell by" date.

That wasn't because he is a Mormon. It's because he comes from and visibly embodies a patrician background. He is a bit prissy in debates, with top notes of arrogance. His manner is a little cold and distant, and he lacks the instinct for connecting with real people. He radiates a kind of elitism that repels, rather than attracts, the "Sam's Club" Republicans (analogous to the blue-collar Democrats) who are this year's prized swing voters. His picture-perfect family, with the handsome sons and blonde daughters-in-law, should be a draw. I'll wager that the very same perfection irritated many Americans whose families don't hang together so neatly - myself included. At the end of the day, his technocratic, problem-solving bent, an asset in a bureaucrat, undermines the most important quality of a president: a good gut. If the phone rings at 3 A.M. you can't call the best minds at MIT. You need your own solid core of principles.

Tom Ridge, former governor of Pennsylvania and secretary of homeland security, also getting current attention, is also a terrible pick. Ridge might have blue-collar appeal, and might be helpful in Pennsylvania - which is a key state. But he is so boring and clunky that he will never be a useful surrogate. I defy anyone who has ever heard him speak to recall anything other than the drone. He is the anti-charisma candidate, in a campaign that needs a new point of interest. His pro-choice views will be a great asset with moderate voters and a great defect with social conservatives. If he were otherwise fabulous it might be worth risking. But he is a plodder. More important is that he didn't do a good job at Homeland Security, setting up or running the organization. Bottom line: too unsexy.

Senator Joe Lieberman, Democrat of Connecticut, embodies the vital interests of serious, national-security-conscious Democrats, who feel that Barack Obama's antiwar intransigence and neo-isolationism are naïve and silly. One hopes there are many such voters, and one hopes this election will be about national security. But Joe Lieberman doesn't need to be on the ticket to attract these voters. He has already run - and is too known. His domestic-policy views make him unacceptable to all Republicans as a potential president - the key veep job.

Representative Eric Cantor of Virginia, is a smart, hardcore conservative who is an observant Jew and a prolific fundraiser. He is a representative, which means no executive experience. Is being Jewish exciting enough to create that game-changing sizzle? I'd say no. For one thing, Joe Lieberman already occupied that spot on a ticket. For another, even if he could bring over a sizeable percentage of Jewish voters - there just aren't enough Jews in America to make such a big difference. And Jews, unlike certain other ethnicities, stubbornly stick to ideology rather than ethnic affiliation in voting. Cantor is one of the three "with a little more experience he'd be perfect" candidates.

Governor Sarah Palin of Alaska was my choice for most of the summer. She is conservative, tough-minded, attractive, has a great life story, including a blue-collar husband and five kids, and seems like a real can-do politician. Furthermore, putting a woman on the ticket this year is the smartest thing McCain could do. It would add missing sizzle, and would help with disgruntled, middle-aged female voters who think Hillary got shafted by a younger, less qualified candidate. Those women include both upper-middle-class professionals who identified with Hillary and working-class women who regarded her as their champion. Palin might appeal to their male, blue-collar counterparts as well.

My infatuation ended, however, when she gave recent interviews which demonstrated that she needs more time in office, and she is insufficiently sophisticated for the national stage right now. A term or more as governor and a good D.C. PR firm to work on her media skills and knowledge of national issues will help.

Governor Bobby Jindal of Louisiana has been discussed to death. Another year. He wisely took his name out of the running - which is yet another sign that he is politically shrewd.

This brings us to Minnesota Governor Tim Pawlenty. He is the last man standing; at first glance a default choice rather than a dazzling one. He is smart, which is important, and thoughtful on the issues of governing a state. He is conservative, but not easily tarred with the "right wing nut" brush - so he won't push away moderates. He is from a working-class background and is a true meritocrat. Ditto for his wife, who was a judge. They themselves are "Sam's Club" Republicans from unpretentious Minnesota. It's hard to imagine him confusing arugula with a major Midwestern crop. He is good looking, with no hint of "pretty-boy." And he has what seems like an attractively low-key demeanor, that suggests the ability to listen rather than raw ego and ambition. He was one of a very few GOP governors to push alternative energy over the past few years.

The Pawlenty family is a perfect counterpart to the Obama family. They are the same age. As with the Obamas, Tim and Mary met in law school. They, too, have two daughters. Just as Barack followed Michelle to Trinity United, from unbelief, Tim, raised a Catholic, followed his Baptist wife to an Evangelical church. Same generation, similar paths, totally different substance. This contrast is pretty compelling, if you ask me.

Pawlenty's downsides are limited to a few tax increases after promising not to, and a question about what kind of conservative he is. He can easily learn to speak with more compelling inflections. Otherwise, with his clear upsides, and limited downsides, he is as good as it gets.
By Lisa Schiffren
Reprinted with permission from National Review Online