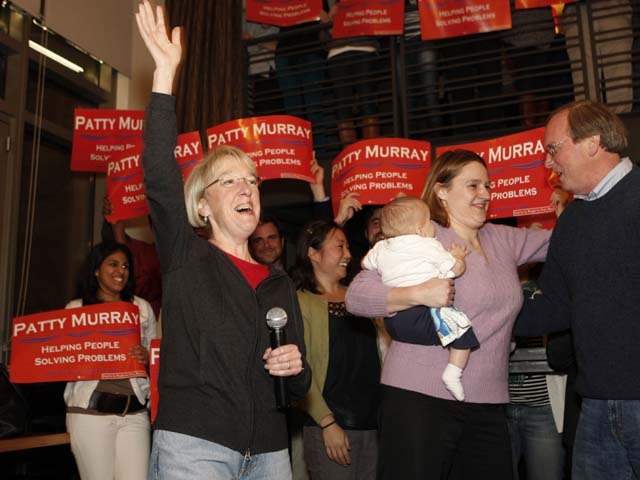 Senate Majority Leader Harry Reid has confirmed that Washington Democrat Patty Murray will chair the Democratic Senatorial Campaign Committee (DSCC) for the 2012 elections, replacing New Jersey Senator Bob Menendez for what is sure to be a challenging task in the upcoming campaign cycle.

"I'm not agreeing to chair the DSCC because it's easy, I'm doing it because our country is facing tough times and we need tough leaders who will make our economy and jobs the top priority, said Murray in a statement Tuesday afternoon.

"Senate Republicans made clear only days after the last election that defeating President Obama was the top priority. My top priority, and the top priority of Senate Democrats, is to create jobs and get the economy moving again. That's a clear difference, and serves as great motivation. Maintaining a Democratic majority is the best way to accomplish that goal," Murray continued.

Senate Democrats face a tough political landscape in the 2012 elections, as the party attempts to maintain a grasp on its slim 53-47 majority in the wake of November's heavy losses. Furthermore, Democrats will be forced to defend 23 seats -- more than twice as many as the GOP, which has just ten Republican Senators up for re-election.

Murray, the Senate's fourth highest-ranking Democrat who recently won a tough fight for re-election to her fourth term, last chaired the DSCC in 2002. During that cycle, Republicans had a net gain of two Senate seats, which allowed them to reclaim a 51-49 majority.

Word of Murray's leadership to the DSCC comes after what is reported to have been a long and difficult struggle to find someone willing to accept a position that has been described as "thankless" and "with little upside": The Hill reports that at least three Senators - New York's Chuck Schumer (who helmed the committee in 2006 and 2008), Colorado's Michael Bennet, and Virginia's Mark Warner - declined Reid's entreaties to take on the post.

According to CNN, Murray was pressured to accept the job.

"She was pushed," an anonymous source close to Murray reportedly told CNN. "It certainly wasn't something she had any plan for election day."

Michigan Senator Debbie Stabenow, however, told Politico she thought Murray was the ideal candidate for the job. "She's been my number one choice all along because she's smart, she's been through a tough race - the kind of race that I'm going to go through," Stabenow said.

In a statement, Reid reiterated his support for Murray in the role. "It's critical that we have an experienced, strong hand steering the DSCC. Patty Murray is that person, and the entire caucus appreciates her decision to take this role," he said. "Senator Murray always had the determination to fight for what she believes in. She's always won. And I'm confident that as the head of the DSCC, she'll do it again."