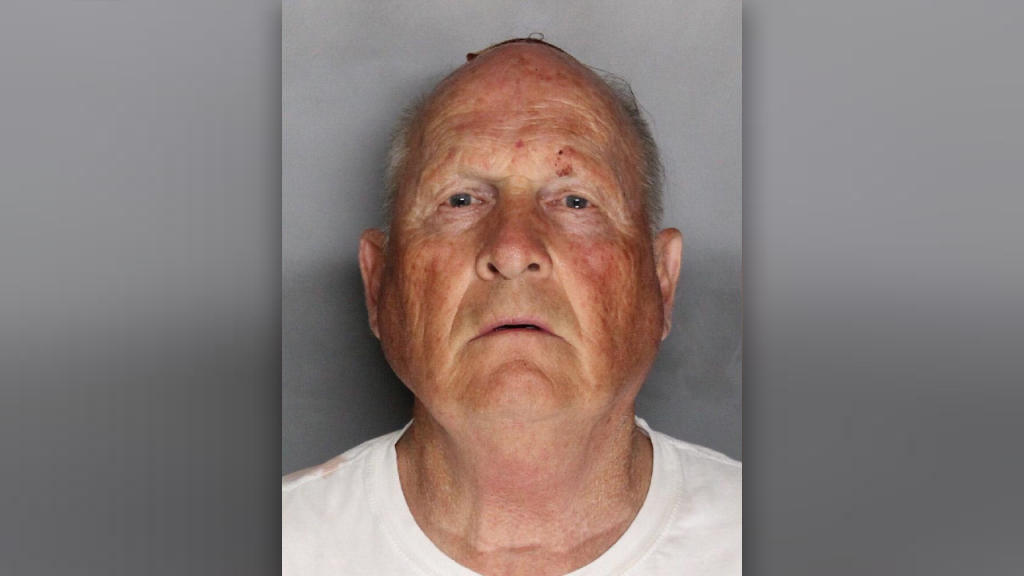 LOS ANGELES -- "You did it, Michelle." Comedian Patton Oswalt proudly and tenderly spoke those words to his late wife in an Instagram video Wednesday.

Finally, an arrest had been made in the case of the Golden State Killer, a moniker Michelle McNamara coined on her personal mission to catch a man responsible for at least 12 killings and 50 rapes throughout California in the 1970s and '80s.

McNamara died in her sleep at 46 in April 2016. She had been in the middle of her hunt for the killer and her book, "I'll Be Gone in the Dark: One Woman's Obsessive Search for the Golden State Killer."

Oswalt helped finish the book after McNamara's death. It became a No. 1 New York Times best-seller.

On Wednesday, authorities announced that a DNA match led them to arrest the Golden State Killer, who they identified as Joseph James DeAngelo, a 72-year-old former police officer.

"This is insane," Oswalt said in another Instagram video when he first learned of the arrest. "Full-tilt freak-out in effect."

Oswalt appeared on "Late Night with Seth Myers" early Thursday and said news of the arrest felt like "a beginning of this whole other chapter."

"Now it feels like this thing that she wanted so badly is done," he said.

He and McNamara's fans were crediting the late sleuth's years of dogged work with helping solve the crime and were disappointed when police didn't give her credit at a news conference announcing the arrest.

Asked specifically about whether McNamara's book helped solve the case, Sacramento County Sheriff Scott Jones said his office had gotten that question "from literally all over the world in the last 24 hours."

"And the answer is no," he said. "It kept interest in tips coming in. Other than that, there was no information extracted from that book that directly led to the apprehension."

On Instagram, Oswalt said: "Even though the cops are never going to say it, your book helped get this thing closed."

McNamara "didn't care about getting any shine on herself," Oswalt wrote on Twitter, comparing her to Frances McDormand's unassuming Detective Marge Gunderson in the 1996 film "Fargo."

"She kept coming at him," Oswalt said.

"48 Hours" investigated the case in the episode, "The Golden State Killer." The broadcast featured Oswalt's first in-depth television interview about McNamara's reporting on the case.

But McNamara's idea for the "Golden State Killer" name, her coverage of the case in "Los Angeles Magazine" and a blog, the shocking news of her death, and the book all shined a spotlight on the decades-old crimes, he said.

"Just the fact that they said the book didn't help but then said, 'We've got the Golden State Killer,' it's a bit contradictory," Jensen said.

Two hours before news broke of the arrest, Oswalt and all of McNamara's collaborators were together for the first time promoting the book with her family at an event outside her hometown of Chicago. It was also the first day of filming of an HBO documentary series based on the book.

"I'm a rational man, but I can't help but feel this transcends coincidence," collaborator Paul Haynes wrote on Twitter.

Oswalt said he ended the event with a thought about the killer: "He's running out of time."

McNamara wrote in her book that she became interested in cold cases as a 14-year-old girl when a neighbor's murder went unsolved. She also wrote about why and how the Golden State Killer case became her obsession later in life.

"The hook for me was that the case seemed solvable," she wrote. "Curiosity turned to clawing hunger. I was on the hunt."

As the assailant committed crimes across the state, authorities called him by different names. He was dubbed the East Area Rapist after his start in Northern California, the Original Night Stalker after a series of Southern California slayings, and the Diamond Knot Killer for using an elaborate binding method on two of his victims.

When DeAngelo was arrested, Sheriff Jones said officers simply waited for him to walk outside his house.

"He was very surprised by that," Jones said. "It looked as though he might have been searching his mind to execute a particular plan he may have had in mind ... but he was not given the opportunity. It happened almost instantly and he was taken into custody without incident at all."

Oswalt and McNamara's fans couldn't help but notice the parallels with DeAngelo's arrest and how her book ends, with a message directly to the Golden State Killer.

"The doorbell rings," she wrote. "This is how it ends for you. 'You'll be silent forever and I'll be gone in the dark,' you threatened a victim once. Open the door. Show us your face. Walk into the light."