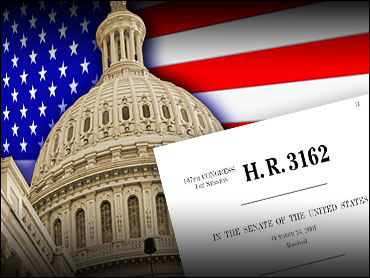 The House and Senate passed a one-month extension of 16 Patriot Act provisions and sent it to President Bush. Instead of expiring Dec. 31, the 16 provisions would expire Feb. 3.

Most of the Patriot Act, which expanded the government's surveillance and prosecutorial powers against suspected terrorists, their associates and financiers, was made permanent when Congress overwhelmingly passed it after the Sept. 11 terrorist attacks on New York City and Washington.

The Senate, with only Sen. John Warner of Virginia present, gave final approval to the new Feb. 3 expiration date Thursday night four hours after the House, also with a near-empty chamber, bowed to Rep. James Sensenbrenner's refusal to agree to a six-month extension the Senate had cleared Wednesday.

Congress can pass legislation with only a few lawmakers present as long as no member of the House or Senate objects. The Senate session lasted four minutes.

Sensenbrenner, chairman of the House Judiciary Committee, said the shorter extension would force swifter Senate action and had the support of the Bush White House and Speaker Dennis Hastert. The Senate reconvenes Jan. 18, and the House returns Jan. 26.

"A six-month extension, in my opinion, would have simply allowed the Senate to duck the issue until the last week in June," the Wisconsin Republican told reporters.

Most Senate Democrats and a few libertarian-leaning Republicans united against a House-Senate compromise that would have renewed several expiring provisions permanently while extending some others for another four years.

Democrats were pleased with a short-term extension, whether for six months or just a few weeks.

"The amount of time is less important than the good-faith effort that will be needed in improving the Patriot Act to strike the right balance in respecting Americans liberty and privacy, while protecting their security," said Sen. Patrick Leahy, D-Vt., the ranking Democrat on the Judiciary Committee.

"We're happy to agree to a shorter-term extension of the Patriot Act," said Rebecca Kirszner, an aide to Senate Minority Leader Harry Reid. "The important thing is to strike the right balance between liberty and security."

House passage marked the latest step in a stalemate that first pitted Republicans against Democrats in the Senate, then turned into an intramural GOP dispute.

Without action by Congress, several provisions enacted in the days following the 2001 terror attacks are due to expire. Mr. Bush has repeatedly urged Congress not to let that happen.

The Senate vote Wednesday night marked a turnabout for GOP leaders, who had long insisted they would accept nothing less than a permanent renewal of the law. The House approved the measure earlier this month, but a Democratic-led filibuster blocked passage in the Senate, with critics arguing the bill would shortchange the civil liberties of innocent Americans.

Passage of a five-month extension would require lawmakers to debate the issue early in 2006, and it is certain to require concessions to the Senate critics who are seeking greater privacy protections.

"No one should make the mistake of thinking that a shorter extension will make it possible to jam the unacceptable conference report through the Congress," said Sen. Russell Feingold, who led the Senate filibuster. "That bill is dead and cannot be revived."

Mr. Bush carefully sidestepped the dispute that developed overnight between Republicans in the House and Senate.

"It appears to me that Congress understands we've got to keep the Patriot Act in place, that we're still under threat," Mr. Bush said before boarding a helicopter for a trip to the presidential retreat at Camp David, Md.

Most of the Patriot Act, which expanded the government's surveillance and prosecutorial powers against suspected terrorists, their associates and financiers, was made permanent when Congress overwhelmingly passed it after the Sept. 11 terrorist attacks on New York City and Washington.

Making permanent the rest of the Patriot Act powers, like the roving wiretaps which allow investigators to listen in on any telephone and tap any computer they think a target might use, has been a priority of the administration and Republican lawmakers.

Some civil liberties safeguards had been inserted into legislation for renewing that law but Senate Democrats and a small group of GOP senators blocked it anyway, arguing that more safeguards were needed.

Senate Majority Leader Bill Frist, said he had no choice but to accept a six-month extension in the face of a successful filibuster and the Patriot Act's Dec. 31 expiration date. "I'm not going to let the Patriot Act die," Frist said.

Mr. Bush indicated that he would sign the extension. "The work of Congress on the Patriot Act is not finished," Mr. Bush said.

CBS News correspondent Mark Knoller reports that Mr. Bush later added that he will work closely with the House and Senate "to make sure that we are not without this crucial law for even a day."

Some Senate Republicans shared Sensenbrenner's dislike for the six-month extension.

"We'll be right back where we are right now," said a clearly frustrated Sen. Orrin Hatch, R-Utah.