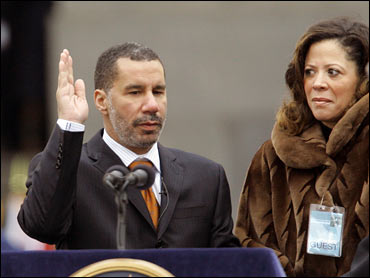 Less than two years after he reluctantly ran for lieutenant governor, David Paterson is suddenly set to be only the third black governor since Reconstruction, and the first in New York.

Attention turned to Paterson immediately after word surfaced Monday that Gov. Eliot Spitzer had been linked to a high-priced prostitution ring.

Spitzer announced Wednesday that he is resigning, completing a spectacular fall from power for a politician with a once-promising career.

Spitzer says his resignation is effective Monday, due to an agreement he reached with Paterson, who will automatically become governor. He is set to complete Spitzer's term, which ends Dec. 31, 2010.

Paterson, a 53-year-old Democrat from Harlem who is mostly blind, is well respected by Republicans and Democrats.

Former New York City Mayor Edward Koch recently called Paterson "very capable, not withstanding his near sightlessness. It's never impeded his public actions or his personal actions, and he's really overcome it in an extraordinary way."

Paterson, who does not use a cane or a guide dog, can make out shapes and even people up close. He lost most of his sight as an infant when an infection damaged his optic nerve. He still talks of his fragile self-esteem in childhood and recalls not being invited to parties because "people thought I would fall and hurt myself."

Paterson's disability has never been an issue in Albany in his 20-year political career. He has memorized lengthy, impassioned speeches without missing a mark; cited arcane legal references in fast-paced floor debates; and won more victories for his party in the Senate than any other leader in the Legislature. His efforts brought Democrats to within a seat of taking the Senate majority for the first time in decades.

Critics and supporters alike all point to the intellect, compassion and humor that Paterson brings to the Statehouse. When Spitzer picked him to be his running mate in 2006, Paterson deadpanned: "I told Eliot, `Whenever you are trying to reform a system, you need a person with vision and a person who is a technician,' and that's what I am ... because I sure don't have vision."

The only other black governors since Reconstruction were Deval Patrick, currently serving in Massachusetts, and L. Douglas Wilder of Virginia, who left office in 1994.

Even New York Republicans have a healthy respect for Paterson.

"I don't think there's an issue David Paterson and I agree on, but he's one of the most decent, honorable guys I've ever met," said Rep. Peter King of Long Island, who already was referring to Paterson as "the new governor."

Paterson has enjoyed a good relationship with Spitzer's chief nemesis, Republican Majority Leader Joseph Bruno. In pointed yet humorous floor debates, a kind of father-son relationship was evident between the younger Harlem Democrat and the rural, upstate Republican, who is 78.

Two years ago, Paterson was so focused on taking control of the Senate and becoming majority leader that he was surprised by Spitzer's offer to be lieutenant governor.

If he ascends to the governor's office, Paterson would also have an advantage in that he would have nearly three years remaining in Spitzer's term.

"If he becomes governor, he can move forward with what he wants to do as governor and start to set a tone," said Lee Miringoff of the Marist College Institute for Public Opinion. "The state will have been shaken by all these revelations. And I think he's someone who is widely respected, and he has a lot of experience in the corridors of Albany."