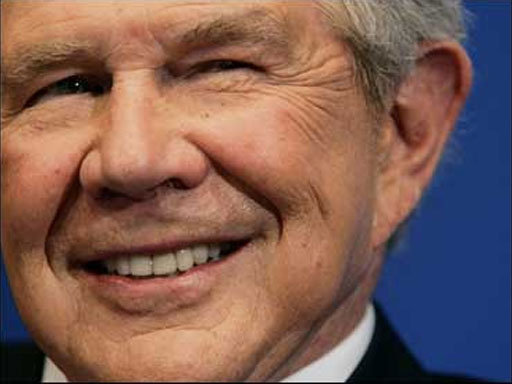 (CBS/AP) Alzheimer's disease is "a kind of death." At least that's what religious broadcaster Pat Robertson says, and that means it's okay to divorce a spouse who is suffering from the devastating neurological disease.

Robertson made the remark on Tuesday to his "700 Club" audience after a viewer asked what advice a man should give to a friend who began seeing another woman after his wife started suffering from Alzheimer's.

"I know it sounds cruel, but if he's going to do something, he should divorce her and start all over again, but make sure she has custodial care and somebody looking after her," Robertson said.

Terry Meeuwsen, Robertson's co-host, asked him about couples' marriage vows to take care of each other "for better or for worse" and "in sickness and in health."

"If you respect that vow, you say 'til death do us part,'" Robertson said. "This is a kind of death."

Is Robertson flouting religious tradition? Most Christian denominations discourage divorce, citing Jesus' words in the Gospel of Mark that equate divorce and remarriage with adultery.

What do Alzheimer's experts have to say?

"I don't think an Alzheimer's diagnosis is like death," Beth Kallymer, a social worker with the Alzheimer's Association, told CBS News. "Even in the final stages, people can still connect and relate and have a need for intimacy - even when they don't know who you are."

But as to whether divorce is appropriate when one spouse is no longer capable of physical or emotional intimacy, Kallmyer demurred.

"This is a very real issue for couples to deal with," she said, adding that spouses of Alzheimer's patients need the support of friends, family members, and perhaps mental health professionals.

"You need to talk it through and understand what all the implications are," she said.

The Alzheimer's Association has more on Alzheimer's disease. Read a personal account from a CBS correspondent about his own experience with the disease, and watch the video here.