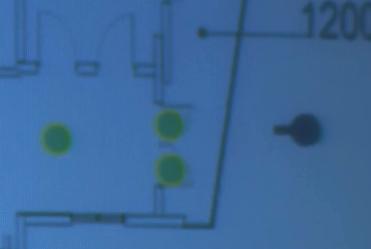 COCONUT CREEK, Fla. -- Faulty classroom design and failures in the police radio and 911 systems contributed to the chaos and deaths during the recent Florida high school massacre, a commission investigating the shooting was told at its first meeting Tuesday. Broward Sheriff's Office Detective Zachary Scott told the Marjory Stoneman Douglas High School Public Safety Commission that teachers trying to lock down their students as the gunman began his attack couldn't lock classroom doors from the inside, but had to grab a key, open the door and turn the lock from the outside.

"That's messed up, no matter how you slice it," said Pinellas County Sheriff Bob Gualtieri, chairman of the 16-member commission, which is examining the actions of state officials before and after the shooting and will make recommendations for changes. Fourteen students and three staff members died in the Feb. 14 shooting, and 17 others were wounded.

Scott played a rudimentary computer animation showing the gunman's actions as he moved through the three-story freshman building during his six-minute attack. The suspect and the victims were represented by dots, with the victims' dots changing colors when they were fatally wounded. The specific victims were not identified. The audience that filled a Broward College auditorium remained silent as Scott talked through the animation.

Gualtieri told the members their goal should be to prevent any more mass shootings.

"Nobody else should have to endure what those children had to endure that day," he said.

The doors also had small windows that enabled the suspect, identified by police as former student Nikolas Cruz, to fire into locked classrooms, killing several people, Scott told the commission.

"I want the people of Broward to know I won't rest until there are answers and people held accountable for what happened," said Andrew Pollack, whose daughter Meadow was killed, CBS Miami reported.

Also Tuesday, a judge ruled that Cruz should continue to be represented in the death penalty case by a public defender at taxpayer expense.

Cruz has only about $28,000 in assets, most of which he cannot immediately access, and that's not enough to hire a private lawyer in a case of this magnitude, Broward County Circuit Judge Elizabeth Scherer wrote.

Cruz, 19, is charged with 17 counts of murder and 17 counts of attempted murder. Public Defender Howard Finkelstein repeated in email Tuesday that Cruz will plead guilty in exchange for life without parole, a deal prosecutors have declined to accept.

"We still believe it is in the best interests of the families and the community to end this case now rather than take a 20-year march to impose the death penalty which will link them for decades to the person who killed their loved one," he said.

The commission also learned that the Broward sheriff's office and Coral Springs police department had different radio systems, preventing the primary agencies responding to the shooting from exchanging information, and that attempts to merge the channels have failed.

Another problem: The city of Parkland, where the school is located, has a bifurcated 911 system; Calls from cellular phones go to the Coral Springs 911 center, while calls from landlines go to the Broward sheriff. Most calls from campus were from cellphones, so Broward dispatchers were getting second-hand information.

The commission also will examine the Broward Sheriff's Office's conduct before, during and after the shooting. Deputy Scot Peterson, the school's security officer, retired after Sheriff Scott Israel criticized him and planned to suspend him for not rushing into the building to confront and kill the gunman. The commission also will consider the conduct of other deputies who arrived at the school but remained outside.

School counselors and mental health officials also will appear to discuss their interactions with Cruz. He spent time at a school for emotionally and mentally disturbed students before being allowed to transfer briefly to Stoneman Douglas. He was kicked out later.

The commission could also examine other Florida mass shootings, including the 2016 massacre at Orlando's Pulse nightclub that killed 49, and a 2017 shooting at Fort Lauderdale-Hollywood International Airport that left six dead. Gualtieri suggested that it focus solely on school shootings, however.

The commission's final report is due Jan. 1.

"What everyone is going to find out is how much incompetency there was that led to my daughter and the other 16 victims being murdered," said Andrew Pollack, Meadow's father.