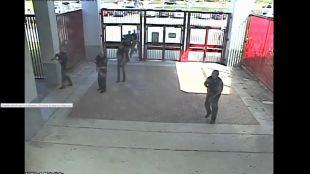 On Wednesday afternoon, the Broward Sheriff's Office said in an email, "In accordance with the rulings by the trial court and the Fourth District Court of Appeals of the State of Florida, certain additional exterior video from Marjory Stoneman Douglas High School on February 14 is being released. Media requested external video showing the law enforcement response to building 12. The courts agreed with the media and ordered the release of additional videos, redacted so as to not show any students."

After viewing the five camera clips released by BSO, it is difficult to see whether anyone was derelict in approaching or entering the building.

What we can see is a lot of chaos and a heavy law enforcement response, but almost all of it came at least 4 minutes after confessed shooter Nikolas Cruz had already left the campus.

At 2:25 p.m., you see students emerge from a building on campus racing to safety.

Seven minutes later, at 2:32 p.m., you see 3 officers running towards the building with guns drawn.

In BSO's timeline, those appear to be Coral Springs officers.

Three minutes later, at 2:35 p.m., a golf cart carrying a victim is seen on surveillance camera.

BSO says a Coral Springs Officer and one of their deputies are transporting the victim.

At about the same time, a campus camera shows more than half a dozen officers. It is unknown which agency was arriving at the school.

At 2:41 p.m., four officers, at least one of which is BSO, are seen with guns drawn walking up a hallway and remaining there for a time.

Finally, ten minutes later, at around 2:51 p.m., a group of BSO officers in tactical gear approach the Freshman building.

The surveillance video provided showed several buildings on campus, but none of the cameras were from the Freshman building.

We don't see Cruz enter or depart the campus or the building.

We also can't tell which officers or deputies went into the Freshman building.

BSO has said in the past that their officers along with Coral Springs went in around 2:32 p.m., 11 minutes after the shooting began.

CBS Miami showed the video to security expert and former Miami-Dade police officer Wayne Black, who has performed threat assessments at numerous schools over the past decade.

Black is not connected to the Stoneman Douglas investigation and he said Scot Peterson definitely should have gone into the Freshman building.

"Kids are in there bleeding to death while he's out there deciding what he should do," Black said.

Black also believes other officers should have gone in to confront the shooter and care for the wounded.

"Who's injured? How many people are shot inside? Go in and give them first aid," Black said. "Put a tourniquet on them. Take your belt off. Bring the EMT's in and protect them."

It would be 11 minutes after the shooting began that BSO says a group of deputies and Coral Springs officers entered the Freshman building.

BSO's policy is to engage an active shooter. It's unclear what impact Peterson's commands to stay away had on arriving officers.

Several of the victims' parents told CBS4 News that they had not watched the video. Andrew Pollack did.

His daughter, Meadow, died in the shooting.

He said he feels poor leadership at BSO created a culture that affected the deputies' response and decision making that day.

He told CBS Miami the video does not seem to clear much up regarding the response of law enforcement.

He believes the Marjory Stoneman Douglas commission, which is investigating the shooting, will get to the bottom of all these important questions.

Earlier in the day, the Florida Supreme Court cleared the way for the surveillance footage to be released.

Click here to read the Florida Supreme Court's disposition regarding the release of the video footage.

The Florida Supreme Court declined to hear appeals from the Broward County School Board and Broward State Attorney's office blocking the release of the video.

Broward Circuit Judge Jeffrey R. Levenson had authorized the release of the footage in April.

Media organizations had sued to obtain the video footage.

The video did not show footage from inside the school.

The School Board did not want the video released because it believes it could reveal blind spots in school security.

Nikolas Cruz, 19, is charged with 17 counts of murder and 17 counts of attempted murder in the shooting. His lawyers have said he would plead guilty if prosecutors would waive the death penalty, but that offer has been rejected.