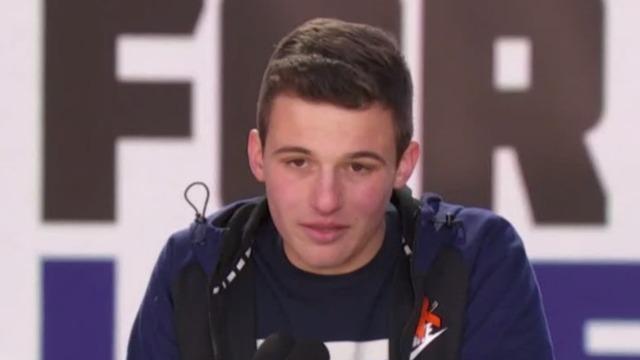 The National Rifle Association (NRA) will not allow guns during Vice President Mike Pence's appearance at its upcoming convention. The ban prompted Parkland, Florida, shooting survivors over the weekend to call out the pro-gun organization for imposing restrictions on its members -- a position the NRA has long championed against.

The NRA, which is expected to attract upwards of 80,000 people at its Dallas conference, deferred to the U.S. Secret Service on the safety measures. Mr. Pence will attend the four-day event Friday.

"Due to the attendance of the Vice President of the United States, the U.S. Secret Service will be responsible for event security at the NRA-ILA Leadership Forum," the NRA said in a online message to attendees. "As a result, firearms and firearm accessories, knives or weapons of any kind will be prohibited in the forum prior to and during his attendance."

Cameron Kasky, one of the founding members of the student-led, gun reform movement "March for Our Lives," blasted the NRA over its fierce resistance to support any sort of safety considerations for children -- but a measure it backed when it involved Mr. Pence, a gun rights advocate.

"The NRA has evolved into such a hilarious parody of itself," he wrote on Twitter, with a screengrab of the NRA's notice.

In the days after the Florida shooting, the NRA and President Trump suggested arming teachers, in order to protect children when faced with a mass shooter. NRA leadership also expressed to have more "good guys" to be armed with guns for heightened safety.

"You're telling me to make the VP safe there aren't any weapons around but when it comes to children they want guns everywhere?" Deitsch wrote. "Can someone explain this to me? Because it sounds like the NRA wants to protect people who help them sell guns, not kids."

"According to the NRA, we should want everyone to have weapons when we are in public," he wrote. "But when they put on a convention, the weapons are a concern? I thought giving everyone a gun was to enhance safety."

Even some former NRA members are confused at the organization's decision to allow Pence to speak, despite its stance on restrictions.