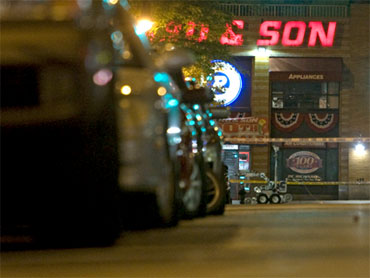 New York police gave an "all clear" Friday night after investigating a suspicious vehicle in the heart of Manhattan.

Police were still questioning the owner of the vehicle, reports WCBS-TV, but the security alert had been dropped. The incident was first reported around 10:30 p.m., when two gas cans were spotted in the back seat by a pedestrian.

The car was spotted Thursday night near the Con Edison utility building, and not far from the Union Square subway station, where several lines connect.

The bomb squad suited up and began an investigation of the 1991 Oldsmobile Cutlass Ciera.

Chief police spokesman Paul Browne said several floors of a high-rise residential building were evacuated and some streets in the area were blocked off as a precaution.

The New York Daily News reported that fire department officials had scanned the vehicle for radiation, and the tests came back negative.

The investigation comes just hours after three Pakistani men who authorities say supplied funds to Times Square car-bomb suspect Faisal Shahzad were arrested in a series of raids across the Northeast as the FBI followed the money trail in the failed attack.

Union Square, located on Manhattan's East Side, is a major pedestrian and tourist thoroughfare. New York University, Greenwich Village, and the landmark Flatiron building are nearby.

Earlier, President Obama was in New York City on Thursday at a fundraiser, and met with police officials to congratulate them on their counterterrorism efforts. "You have saved an awful lot of lives," he told police officers, referring specifically to the thwarted Times Square bombing attempt.

As Mr. Obama visited the police, his administration pushed back hard against claims from New York lawmakers that their counter-terrorism budget was being cut.

The city, White House officials said, was actually getting an increase of $47 million for port and transit security over the previous year - so long as you include more than $100 million in grants from the stimulus package.

"With that money, the total for NYC will be $245 million, more than $47 million (increase) than what was allotted by the Bush Administration in the previous year," the administration said. "In fact, one out of every three recovery dollars for transit and port security went to NYC, making them the largest recipient in the country."

Since the May 1 attempt, there have been several reports of suspicious vehicles and packages around the city that have turned out to be false alarms.