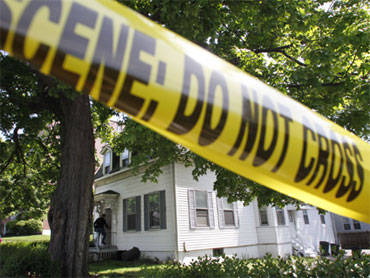 Three Pakistani men who authorities say supplied funds to Times Square car-bomb suspect Faisal Shahzad were arrested Thursday in a series of raids across the Northeast as the FBI followed the money trail in the failed attack.

Investigators said it was not yet clear whether the three men knew how the money was going to be used.

The men - two seized in the Boston area, one in Maine - were arrested as federal authorities searched homes and businesses in a coordinated series of raids centered in the Boston suburbs, on New York's Long Island, and in New Jersey.

They were arrested on immigration violations - administrative, not criminal, charges. They were not charged with any terrorism-related crimes. Their names were not released.

The raids resulted from evidence gathered in the investigation into the Times Square bomb attempt two weeks ago. FBI spokeswoman Gail Marcinkiewicz gave assurances Thursday that there was "no known immediate threat to the public or any active plot against the United States."

In Washington, Attorney General Eric Holder said investigators believe there is evidence that the men were providing Shahzad, a Pakistan-born U.S. citizen, with money, but they have yet to determine whether the men knew the funds might have been intended for a terrorist act.

But, sources tell CBS News the evidence is compelling. U.S. officials say they can place Shahzad at a Pakistani training camp and his story claiming connections to known terrorists is proving to be true. Sources say investigators have still found no clear evidence that Shahzad had any co-conspirators in the U.S.

A top Massachusetts law enforcement official, who spoke on condition of anonymity because the investigation is still going on, said investigators are not sure whether the two Boston-area men were witting accomplices or simply moving funds, as is common among people from the Middle East and Central Asia who live in the U.S.

"These people might be completely innocent and not know what they were providing money for," the official cautioned, "but it's clear there's a connection."

Authorities have been investigating whether Shahzad - who authorities say needed only a few thousand dollars to buy the used SUV and the bomb components used in the attempted May 1 attack - was financed from overseas.

Muslim immigrants for years have used informal money transfer networks known as "hawalas" - which rely on wire transfers, couriers and overnight mail and are cheaper and quicker than banks - to send cash to their families overseas. But since the Sept. 11, 2001, attacks, authorities have worked to dismantle the system, fearing it allows terrorists to raise and launder money.

Hawalas use very little paperwork. The cash is transferred hand to hand and is often delivered by couriers for a fee. Since there are few records, Hawalas are frequently used by terrorists to move money, Orr reports.

Sources say Shahzad claims he obtained a few thousand dollars in cash last month from a money exchange in New York and two spots on Long Island were among the locations searched.

Despite being unemployed and apparently broke for months before the unsuccessful attack, Shahzad paid $1,300 in cash for the SUV used in the attempt, as well as thousands of dollars on plane tickets.

Two of the men under arrest overstayed their visas and the third is already in removal proceedings, said another law enforcement official, who was not authorized to discuss the ongoing investigation and spoke on condition of anonymity.

Shahzad, 30, has waived his right daily to appear in court since his May 1 arrest on charges he tried to blow up a van packed with a gasoline and propane outside Times Square's busy restaurants and Broadway theaters, U.S. Attorney Preet Bharara said Thursday. He is continuing to provide investigators with information, Bharara said.

"We are doing exactly what, I think, people want us to do, and that is to make sure we get all the information we can with respect to any associates he may have, and other information that would help us to prevent anything further from happening in the United States," the prosecutor said.

Holder, on Capitol Hill Thursday facing criticism from Republicans for battling terrorism from within the criminal justice system, cited the raids as evidence of the Obama administration's effective approach.

Among those who criticized Holder before he shared the news was Rep. Lamar Smith of Texas, the judiciary committee's ranking Republican.

Using the latest development to underscore his rebuttal, Holder said that protecting the American people is the government's top priority.

"We are on the right path," the attorney general declared. He said the criminal justice system has proven its strength.

The civilian justice system has helped persuade terrorist suspects such as Faisal Shahzad, who is charged with the Times Square event, to provide useful information, the attorney general said in prepared remarks.

In another political drama Thursday, New York lawmakers complained that the Obama White House had cut New York City's funding for fighting terrorism in spite of the recent attempted attack.

The White House flatly denied that claim, pointing out that, includinge $100 million in grants from the stimulus package, New York actually saw a $47 million (or roughly 25 percent) increase in funding.

Shahzad, a budget analyst who lives in Bridgeport, Conn., returned to the U.S. in February from five months in Pakistan, where authorities say he claims to have received training in making bombs.

A law enforcement official called Thursday's raids "an evidence-gathering operation" and not a search for suspects. The official, speaking on condition of anonymity, said officials are investigating whether Shahzad got his cash through illegal money transfers.

Authorities raided a home in Watertown and a Mobil gas station and a vehicle in Brookline, another Boston suburb; a condominium in Cherry Hill, N.J.; a print shop in Camden, N.J., and two Long Island homes, law enforcement officials said.

Vinny Lacerra, 50, who lives across the street from the Watertown house, said he was in his living room about 6 a.m. when he heard somebody shout, "FBI! Put your hands up!" and saw 15 to 20 agents with guns drawn surrounding the house.

And Barbara Lacerra told CBS station WBZ-TV she saw agents take out a young man in shackles and handcuffs. She said he appeared quiet and cooperative.

Another witness told WBZ that authorities removed boxes of paper, computers and a bag of money from the home.

Ashim Chakraborty, who owns a home raided in Centereach, N.Y., said FBI and police wanted to interview a Pakistani man and an American woman who live in the basement. The woman, who did not identify herself, was still in the basement Thursday afternoon, telling reporters only, "Drop dead. I'm an American."

According to CBS station WCBS-TV in New York, the FBI was looking to arrest seven people across the Northeast in connection with the investigation.

Shahzad, 30, is accused of trying to detonate a bomb-laden SUV in Times Square on May 1. Police said the bomb had alarm clocks connected to a can filled with fireworks apparently intended to detonate gas cans and propane tanks.

The vehicle smoldered but didn't explode. Federal agents, tracing Shahzad through the SUV's previous owner, caught him two days later on a plane bound for the United Arab Emirates as it was departing New York's Kennedy Airport.

There was no immediate comment from Pakistan on the raids.

Islamabad has said it was too early to say whether the Pakistani Taliban, which operates from the country's lawless northwest tribal region, was behind the Times Square plot, although the U.S. has said it found a definite link.

Pakistan has detained at least four people with alleged connections to Shahzad.