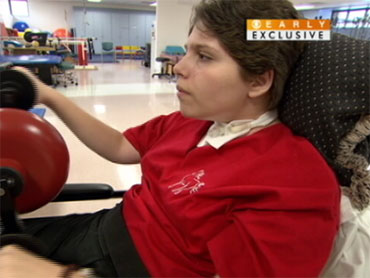 Teagan Marti fell 100 feet from a ride at a Wisconsin amusement park this past summer. It was a fall no one believed she could possibly survive. But now Teagan is speaking out for the first time about the accident.

"Early Show" co-anchor Maggie Rodriguez traveled to Florida last week and spoke with 13-year-old Teagan about her fight for life.

Park Ride Victim's Father: "She Was Dead"
Park Ride Worker Who Dropped Girl Is Back on Job

Julie Marti, Teagan's mother, said, "She had seen this thing on the Travel Channel, and she wanted to go on it."

Travel Channel described Terminal Velocity as "a bungee jump without the chord."

The ride lifts people 100 feet above a net, then drops them into a freefall.

But when it was Teagan's turn to ride, the operator, Charles Carnell made a tragic mistake and released her without putting the safety net in place. Teagan plummeted 10 stories before crashing to the ground.

Rodriguez asked Teagan's mother, "How much did you see?"

Julie Marti said, "I saw the entire thing. I was the first one to do CPR on her and it was just horrific."

Teagan fractured several vertebrae, and crushed her pelvis, spleen and liver. Barely clinging to life, she was airlifted to a nearby hospital.

Carnell was criminally charged with reckless injury and faces up to 25 years in prison.

Julie Marti said of the accident, "I wish I could forget that moment, because I remember it all."

Today, Teagan struggles with the simplest of tasks, is unable to walk, and can barely speak.

When asked what she first remembered after the accident, Teagan answered, but inaudibly.

Her mother, speaking on her behalf, said, "Waking up in the hospital."

Julie said, "In the beginning, we were told she is never going to walk again, but you know what -- God has different plans for her."

Since Teagan stretched, but did not sever her spinal cord, there's hope that she will one day walk again.

Rodriguez said to Teagan, "Give me a thumbs up if you believe you will walk again."

Though Teagan's voice is still extremely weak, she has perfectly re-mastered her ability to send text messages. In fact, she thanked Rodriguez, by sending this text message: "Hi Maggie, thank you for coming."

Rodriguez responded via text message, "You're welcome. You're my hero."

Rodriguez said Carnell has said through his attorney that he's devastated and that he just blanked out and didn't mean any harm.

Julie said, "It's never happened before so I don't understand how he said it could happen. There should have been a failsafe mechanism in place so this could never happen to anyone."

Since the accident, Rodriguez pointed out, the park has put up red tape to prevent other employees from releasing people too soon.

But Julie said that's too little too late.

"I don't think red tape is the answer," she said. "I think that there should be some mechanism in place that would prevent anyone from being dropped without something in place to stop that from happening."

When asked by Rodriguez what the appropriate punishment for Carnell might be, Julie said she couldn't offer an answer.

Rodridguez noted the family has settled with Extreme World, and is now going after the manufacturer of the ride.

And Carnell faces up to 25 years in prison.

"I certainly never thought that he intentionally hurt Teagan," Grossman said. "Having said that, he represents a class of people who are given an awesome responsibility, and they just can't be 'blacking out' or not concentrating or whatever it might be."

"I think that the lesson is that despite your kid's wishes and impulses to want to go on these thrilling rides so-to-speak, take a look at the venue," he said. "Try to understand, is this a state-of-the-art machine? Is it something that is sort of cobbled together? You probably won't have that opportunity and we rely very heavily on the government to do the appropriate inspections, and this was just a battered piece of junk, frankly, that needed repair and this red tape wasn't a solution whatsoever."

Julie added, "I just think this ride should never be in operation again. It should be shut down, and this should never happen to anyone else ever again."